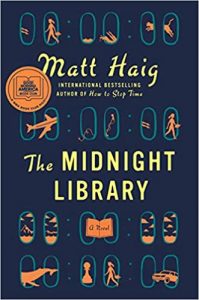 She was none of these things. Instead, she was living in a crummy apartment in the same town where she grew up, working at a part time job (until she gets fired) and taking care of her cat, Voltaire. Who dies.

Matt Haig has written a very deep fantasy exploring life, death, and meaning. All of us can fill a book with our regrets. “What if” is a question no one can really answer. Every decision, every choice, every direction we take opens up new doors and closes others. I went to college in Ohio, not Colorado. I met my wife in college. Because of her, we moved to New York City. “What if” I had stayed in Colorado? I will never know. Doors opened in Cincinnati (we met, fell in love, got married) that would almost certainly never have opened in Colorado. But there would have been other doors there, doors that would have led me to a different life in a different place and probably meant I would be a very different person today than I am.

I learned long ago that “potential” is actually a four-letter word. In America, many swear words are four letters long, so cursing can be referred to as “using four letter words.” Obviously potential has more letters, but it is no less a curse. It is a cudgel used to beat yourself. A meme I’ve seen more than once describes someone as dressing normally and going trick or treating. The “costume” is that of a “former gifted child.” When people ask, “What are you?” the wistful reply is “I could have been so many things.”

Nora gets to explore those many things in a trip through multiple universes that could have been. Ultimately, though, she will have to decide where she belongs. Her decision will mark her fate, and that of The Midnight Library.

Beautifully written, achingly poignant, and deeply thoughtful, Matt Haig has given us a moving look at what is truly meaningful in life. This one will stay with me.