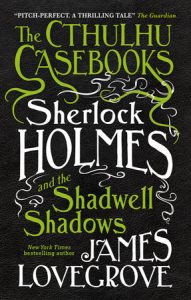 You may think you know all about Sherlock Holmes and his faithful companion Dr. John Watson. Holmes is the epitome of logic and reason. Eschewing supernatural explanations, he trusts logic and science and the dogged stolidity of the loyal Watson.

You would be wrong.

In The Cthulhu Case Books trilogy, author James Lovegrove shares some long hidden manuscripts that come to him from the estate of a very distant relative of his, a relative who was also related to the author H.P. Lovecraft. Purportedly, Watson had published greatly fictionalized versions of the real adventures he and Holmes experienced, versions that gave short shrift to anything supernatural. Those versions were not the true story, and these manuscripts sent originally to Lovecraft tell the story behind the story.

People are dying under strange circumstances in the seedy neighborhood of London known as Shadwell. Once a month, just after the new moon, a body is found having been desiccated and wearing a facial expression of utter terror. Since the area is poor and the dead people not members of polite society, neither reporters nor police have caught the connection.

Clues lead the pair to a local opium den run by a prominent Chinese immigrant. But despite his significant involvement, Holmes is not convinced that he is the mastermind behind the plot. Indeed, there is another mind at work, one that can challenge even the great detective. This mind is aided by powers ancient and grim, powers that do not have any love for humans. Gods of old are stirring, and there are those in London who will use their rise for their own opportunities.

Author James Lovegrove blends Doyle and Lovecraft in ways that do homage to both writers while striking out in a boldly different direction. Weaving the monsters of the one into the world of the other, Lovegrove takes these two trailblazing writers and forges his own path with their work, a path that would be daunting to most. That he does so successfully is a testament to his work and his love for these past masters.