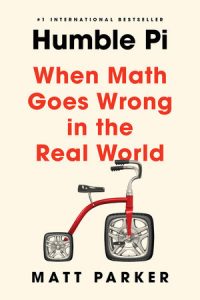 The subtitle of Humble Pi really sums up the stories in the book: When Math Goes Wrong in the Real World. It is a collection of stories, woven together by Parker’s penchant for storytelling and his delightfully wry sense of humor, about real math problems in the real world causing real problems.

Most Americans remember the Mars mission a few years ago which ended with a multimillion dollar explorer smashing into the surface of Mars. The reason: one set of calculations used the metric system while another used the Imperial system. The result was that the parachute opened far too late and Mars has a bench warrant out for humanity’s arrest for littering their planet.

Other examples are much more dangerous or even deadly to human life. A bridge collapsing not once but twice because the tolerances of the support struts were miscalculated. A number of workers died. A catwalk in Kansas City collapsing because the design was changed after the tolerances were calculated and the calculations were never updated for the new design. Dozens of people either plummeted to their deaths or were crushed beneath the structure.

Sometimes math errors can be somewhat amusing. A bridge between Germany and Switzerland was supposed to meet at the halfway point of the crossing. Instead it was roughly 54 cm off. The two countries calculate sea level differently. The engineers took that into account, but added the difference to the wrong side. What might have been a 27 cm difference was doubled. In London the Millennium Bridge was designed to support tremendous weight without moving. Unfortunately it was a very resonant design, so resonant that people walking across it caused it to vibrate then “bounce.” Although the design was corrected and the flaw no longer exists, the nickname “The Wobbly Bridge” is likely to follow it for many years to come.

Matt Parker is a professional math communicator and comedian. Actually he is based in Great Britain, so I suppose he is a “maths” communicator. He hosts his own YouTube channel, is a host on “Outrageous Acts of Science,” writes about math for the Guardian, and has math-based stand-up routines. He calls himself a “Stand-Up Mathematician.” We probably could use a lot more of those in our world.

Humble Pi was not written to make fun of the mathematicians and engineers and programmers who got it wrong. It is meant to demystify math for a general audience. It is not full of equations (though there are quite a few) nor is it a jeremiad against people who make mistakes. Rather, it is appropriately sympathetic to the victims of math mistakes and to those who have made them. Math is hard. That is not the same as it being impossible. People will make mistakes, people will always make mistakes, and mistakes are no reason to quit. They point out what doesn’t work (hopefully without loss of life) and create opportunities to grow and learn.

Parker makes math fun. I wish I had had this book while in high school. The love for math I felt all the way through junior high died a cruel death in the confusion and boredom of my trigonometry and calculus classes and I have avoided any sort of math since then. Perhaps if I had experienced a little more Humble Pi, I might have given myself another chance.

Then again, I probably would not be blogging about books like Matt Parker’s, so there is an upside.