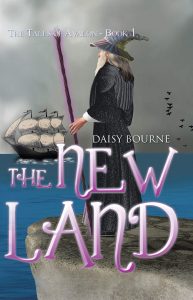 Young fans of Arthur, Merlin, and fantasy novels in general may be drawn to this series following the heroes of Camelot in their new home, a mystical land called Avalon. Despite the stories, Arthur did not die. He was taken by Merlin to Avalon, where he was nursed back to health by the witches of this land. Now he leads a small community of humans, witches and wizards, and fairies, whose only hope is to live in peace.

The king’s son, Edward, is maturing into a solid leader. Still impetuous, he occasionally allows his emotions to guide his decisions. He is not the only young man who has behaved rashly, though, and overall there is great hope and expectation that he will be a leader in the mold of his father.

Although the land appears to be abandoned and without other residents, Arthur, Merlin, Edward, and the others soon discover that they are not alone. The residents of the nearby forest are intimidating and unwelcoming. A young human girl living alone in the mountains has a gift for taming animals, a skill for archery, and an unwillingness to be civilized. And beyond the sea lies another threat, the people who destroyed the earlier community and may return again at any time.

Although there are fighting scenes, the gentle nature of the prose definitely feels like this is a book for late elementary and early middle school readers. Some of the vocabulary may stretch younger readers, which is not necessarily a bad thing. The focus of the story is on Edward, a teenager with the impulsiveness and deep emotions of youth, one who is very relatable to young readers as he wrestles with his relationship to his father, his companions, the young women he meets, and the man he is supposed to become.

The New Land introduces us to a series set in Avalon. Look forward to the ongoing adventures of Camelot’s refugees as they pursue their new lives. 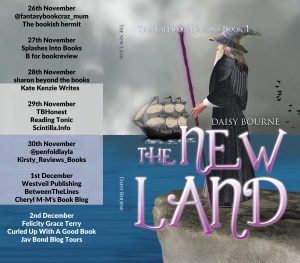 Our thanks to Rachel Gilbey of Rachel’s Random Resources for our copy of The New Land, given solely in exchange for our review. The opinions here are solely those of Scintilla. For other perspectives, check out the other bloggers on this tour.