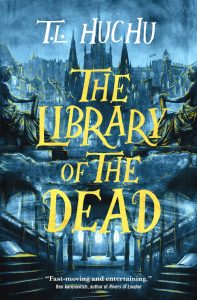 Ropa is scuffling for her money. She is the main breadwinner for her family, which includes her grandmother and her little sister. They live in a camper in a slum in Edinburgh, a very different place than the Edinburgh seen by today’s tourists. They live in a different time, when much of society has reshaped itself, few people can get cars or gas, and school is a luxury this teen cannot afford. So Ropa has dropped out of school to earn money, enough money to feed her small family and afford the rent on the property where their camper is parked.

Hers is not the gig for just anyone. Ropa is a ghostalker. She can see and speak to ghosts and carry their messages back to the people they left behind. It is a rather tame sort of magic, but is valuable to both the dead and the living. Unfortunately, the value is not always enough to feed a family and pay the rent, especially when thuggish police shake her down. But there’s always tomorrow night, there’s always more ghosts, and there’s always her family to love her.

Then Ropa meets a ghost who needs help but has no living family to pay. However, her need is urgent. Someone has stolen her child. Other children have also been stolen and some have been returned in terrible shape. She is afraid for her son and asks Ropa to help. At first Ropa says no. You’ve got to pay to play in her world. But her grandmother intervenes, so Ropa begins looking into the situation.

This is the setup for a delightful new urban mystery which would appeal to adults and older teens alike. The Library of the Dead is set in a strange yet familiar Edinburgh. Things have changed but not so it’s unrecognizable. People watch old TV shows (e.g., Murder, She Wrote) and for the rich life continues much as it had before. But the poor are very poor. Preyed upon by gangs and police alike, they have to fight for every scrap they can get.

Ropa is an amazing character. She is brash and often vulgar, she is confrontational yet vulnerable, she is fiercely loyal to her family and her friends and just as fierce a foe to those who would harm them. That’s not to say she is foolish. When the police shake her down, that is a battle she cannot win and she gives them the money they demand. But if a friend or family member is in trouble she will charge in without concern for her own welfare.

T.L. Huchu brings to life a young woman of color in an overwhelmingly white city. He tosses in a young man, Jomo, who has been a friend of Ropa’s for years, and Priya, a wheelchair bound(?) girl about Ropa’s age whom she meets during the course of the book. I use a question mark with Priya simply because her wheelchair is far from limiting her agency. Indeed, Priya uses it to save their lives in a thrilling chase passage that I would love to see adapted to a screen someday.

The Library of the Dead is a fresh take on the urban fantasy genre, a genre that is already rich with diverse options. Huchu left plenty of room for sequels and further development of the characters and of their world. As Ropa might say, I’m here for that.