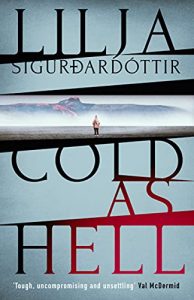 Áróra was born in Iceland, daughter of an Icelandic father and an English mother. Raised in both countries, she has made her adult home in Edinburgh where she is a private investigator of financial crimes. She is distant from both her mother and her sister. Her sister, Ísafold, has returned to live in Iceland with her fiance, Björn, a drug dealer who beats her. After declaring that she would no longer go to Iceland to rescue her sister, Ísafold blocks Áróra on social media and refuses to talk with her.

So when their mother calls Áróra, worried because she has heard nothing from Ísafold in a couple of weeks, Áróra is very reluctant to travel once again to search for her sister. But worried mothers are hard to resist, and Áróra finds herself in Iceland, thinking that if her sister has been smart she has finally escaped to someplace warm and far away from Björn.

Author Lilja Sigurðardóttir writes some of the most compelling mysteries I have read. She specializes in convoluted plots that simmer then boil over to the big reveal. This entry into a new series follows a similar path. We are introduced to multiple characters, some of whom might play a role in Ísafold’s disappearance, others who have their own stories to tell which intersect with one or more of the major characters. As the story unfolds, the tension rises and the stakes get higher. How Sigurðardóttir pulls together the various strings into a comprehensive whole is testament to her craft as a writer.

A word of credit also goes to her longtime translator, Quentin Bates. Bates threads a difficult needle, keeping the Icelandic flavor to the story while giving enough explanation to allow those of us unfamiliar with the culture to appreciate the nuances. Translation is more than simply moving words from one language into another. Bates embraces his role of translating both story and culture, never allowing them to conflict. This author/translator team is brilliantly paired.

Cold as Hell is a powerful story, with strong characters and a fascinating plot. Were I a financial criminal, I would not want Áróra on my trail. If I were missing, however, there is no one I would rather have looking for me than this exciting new protagonist.

Our thanks to Anne Cater of Random Things Blog Tours for our copy of Cold as Hell, given solely in exchange for our review. The opinions here are those of Scintilla. For other perspectives on this book, check out the other bloggers on this tour.