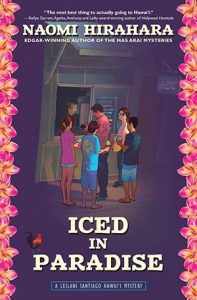 We have never been to Hawai’i. I’m sure there are some terrific bookstores on the islands, so when Scintilla strikes it rich and we can fly around the world on the expense account, we will certainly stop there and check out the bookstores. Maybe also the beaches, volcanoes, jungles, luaus, and shave ice. (Definitely not “shaved” ice.)

Leilani Santiago has left Seattle and her boyfriend Travis behind to return home to Kauai. Her mother has been diagnosed with MS. Her father is often absent, traveling the world as a professional surfer. The family shave ice shack is their primary source of income and between her grandmother’s advancing age, her father’s peripatetic impulses, her mother’s illness, and her younger sisters’ school, the family is struggling to keep things going. Leilani comes home to help.

She did not expect to trip over a dead body on the floor of the shack. A young professional surfer being mentored by her father is lying on the floor in a puddle of water. Very quickly the police focus on Leilani’s father as the main suspect. Although she is not close to her dad, she is convinced he is not a murderer. He may be a jerk, he may be mostly absentee, he may be a lot of things. He is not a killer.

In some ways this is a traditional mystery novel. Smart novice finds body. Police focus on suspect close to novice. Novice sets out to prove innocence of friend/family member. If you are a fan of the mystery genre, this is all familiar territory. I don’t mean this in a negative way at all–there are reasons we enjoy mysteries and this book checks the boxes for a smart plot with a satisfying story.

What sets this book apart is the skill of Naomi Hirahara. First, her protagonist. Leilani Santiago is all American, all Hawai’ian, and all millennial. Born into a family with Japanese, Filipino, and caucasian ancestry, she does not look like your typical amateur detective. She is smart, sassy, angry, conflicted, and courageous. Santiago struggles with “code switching,” a term referring to the way that people, typically people of color, change the way they interact with other populations. At home on the island, among family and friends, she speaks pidgin–a hybrid language of English and Hawai’ian. Pidgin is not a “dumbed down” language, but rather a hybrid that incorporates words and structures from multiple languages to create a mutually understandable translation matrix. It is similar to the creole languages spoken in many places around the world, such as in Haiti. In Seattle, among her mainland friends and with her mainland boyfriend, she speaks American English. That need to fit in to a different culture does not exist at home.

Second, Hirahara seamlessly integrates issues facing Hawai’i and its people into the book. Issues of land possession and alcoholism among native peoples factor into the narrative. Santiago gets personally involved with these matters and they play significant roles in the denouement of the mystery.

Fundamentally, Iced in Paradise is a solid mystery novel that stands apart because of the sassy and bold character of Leilani Santiago. Naomi Hirahara gives her a unique voice and sets her firmly into the setting of our island state. There may be many reasons to visit Hawai’i; clearly the fantastic people as represented by Santiago are among those reasons.