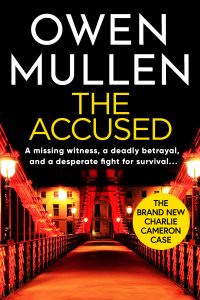 PI Charlie Cameron is great at finding people. So a mobster’s wife thinks he might be just as good at helping people be not found. Kim Rafferty is tired of the physical and psychological abuse. She is tired of her husband’s philandering. She is worried about their daughter. She wants to disappear with her daughter, somewhere Sean Rafferty can never find her.

Dennis Boyd has a very different problem. He has just been released from prison after spending or 15 years there for a murder he claims that he did not commit. The widow of the victim wants Cameron to find out who did kill her husband: she also believes Dennis Boyd is innocent.  The evidence against Boyd was not compelling and relied on three questionable witnesses, but since part of the evidence against him was their affair, her participation is…awkward. Once those witnesses start getting killed, there is a much more present threat that Cameron must find.

In Charlie Cameron, author Owen Mullen has a winning character who has a gift for finding both people and problems. Whether it’s crossing the lines with his police friend or getting distracted by a beautiful woman, Cameron has an unerring compass for both trouble and justice. He always manages to go in the right direction, but sometimes insists on crashing through (metaphorical) hedges, windows, and walls to go there. His friends may have their own issues, but they are always there for him and he always has their backs.

And sometimes their bar tabs.

Our thanks to Rachel Gilbey of Rachel’s Random Resources for our copy of The Accused, given in exchange for our review. The opinions here are solely those of Scintilla. Check out the other bloggers on this tour for more perspectives.