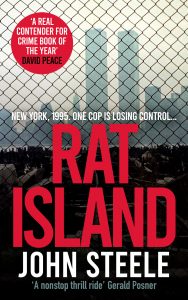 Callum Burke is a Belfast man working as a Hong Kong cop in 1995, two years before the transition from British to Chinese rule. Which begs the question, what is he doing in New York City?

It begins when he is late to a taxidermist’s murder.

Or maybe it begins when he used a knuckle duster on the jaw of a Triad leader’s nephew. Or watched the Triad leader himself die of an overdose, never calling for an ambulance. Or when the new Triad leader swore revenge against Burke for the death of his mentor. Or when his wife left for America with their child. Wherever it begins, it has led Burke to New York City in an undercover operation that might salvage his career and give him a chance to restore his family.

Unless, of course, it kills him.

Burke is charged with going undercover in the Irish Mob. Once there, he is to gather evidence for the US-DEA (United States Drug Enforcement Agency) on ties between the Hong Kong Triads and the NY Irish Mob. The Triads have been diversifying out of Hong Kong in preparation for the return to Chinese rule. Some of their money is flowing into Manhattan, along with some of their heroin. The DEA believes that the Irish are working as distributors for the Chinese in neighborhoods outside of Manhattan’s Chinatown, but they cannot prove the connection. Burke, along with two other Hong Kong policemen, are there to help.

Choosing Calum Burke for the job was a gamble. He was about to lose his job in Hong Kong after the incidents with the Triad. He drank too much, smoked too much, and gambled too much. This was his last opportunity, but it was also the best opportunity the DEA had. The dangers for Burke, though, go beyond getting killed on the job. Surrounded by opportunities for more drink and more gambling, indeed, constantly betting on his own life, would he crumble under the pressure. In his desperation to become a man his daughter could be proud of, would he instead become a man everyone would rather forget?

John Steele occasionally includes chapters from the perspective of other characters, but his focus remains squarely on Callum Burke. Burke is a wounded, perhaps broken, certainly dangerously flawed man. He is haunted by demons that he invited into his life, and he constantly struggles to survive the fires they ignite around him. Burke lives in constant fear that he will be discovered. That fear is justified, and more than once it is a close call. Tension builds constantly as Burke rises in the organization, as the Triads begin to make their move in New York, and as the seemingly inevitable confrontation between the head of the Hong Kong Triad and Burke approaches. Left open throughout most of the book is a question well worth asking: Even if Burke survives, will he ever be restored?

Rat Island is a clever and intense book. Some thrillers and crime novels gloss over the dangers of going undercover, treating it as sort of an acting gig where you are onstage for a few hours a day and then return home to real life, turning your identities on and off when the curtain rises and falls. Calum Burke rooms with a member of the mob. He eats breakfast, lunch, and dinner with them. He is compelled to commit crimes with them or face being callously murdered. You cannot work in mud and stay clean. And the taint of going undercover is not physical, or at least not only physical. Bloodstains may wash off of the outside, but the nightmares and trauma remain and calling out in your sleep is an invitation to death.

Our thanks to Rachel Gilbey of Rachel’s Random Resources Blog Tours for our copy of Rat Island, given in exchange for our review. The opinions here are solely those of Scintilla. For other perspectives on this novel, check out the other bloggers participating in this tour.