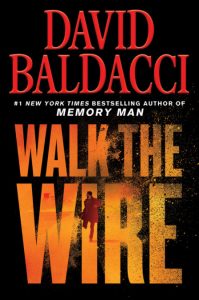 FBI Agent Alex Jamison and her consultant/partner Amos Decker, the “Memory Man,” are sent to London to solve a murder. No, not that London. London, North Dakota. A body has been found by a hunter, a body that had been left in the wild already autopsied before a hunter stumbled across it.

Neither the FBI personnel nor the local sheriff’s office are quite sure why the FBI has been called to investigate what seems to be merely a local murder. Still, they begin interviewing people who knew the deceased: the religious community where she taught school, her neighbors in the apartment building where she lived, the flophouse where she took customers during her other “job” as an “escort,” the Air Force officer in charge of the local base.

The investigation seems to be stalling and the investigators do not think they are making progress. But someone wants them to stop. And when Amos Decker finds himself literally in the crosshairs of an assassin, an unexpected ally comes to his rescue.

Who? That would be a spoiler!

David Baldacci has an extraordinary gift for turning an unlikely setting into an epicenter of national and international intrigue. London, ND is a small town booming with the flush of new money and new residents lured by the fracking industry. Fracking is a resource extraction process that has transformed the oil industry, allowing for incredible amounts of fossil fuels to be pulled from areas long deemed impossible to drill. Small towns throughout the US (including our state of Pennsylvania) have been transformed by the new residents and the money they bring. Obviously, not all of those transformations have been positive. New residents bring new money but also bring new problems: overcrowding, stress on local infrastructure, crime. Baldacci captures these stressors as they both influence and impede the investigation.

Fans of the thriller genre who are not familiar with Baldacci (I suppose there are some out there, but I can’t imagine who) will likely enjoy the complex plot and unexpected twists this story takes. Fans of David Baldacci, though, will absolutely love this book. It highlights Baldacci’s gifts, takes existing characters to new depths, and may be the best yet of The Memory Man series.