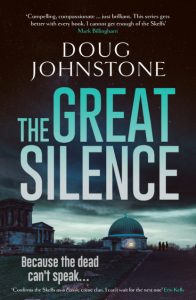 After reading this book, I began to think about the many Scottish authors I’ve had the privilege to read and review over the last few years in this blog. It dawned on me that possibly every one of them uses Scotland as a protagonist itself. None do it better than Doug Johnstone. I have never been to Edinburgh, but after reading The Great Silence I feel like I would walk the streets with a strong sense of deja vu.

I am wandering into an established series late to the party, which is hardly unusual for me. The Skelfs are a family led by matriarch Dorothy. She runs the Skelf Funeral Home and the family Private Investigative Service, which is an absolutely inspired combination of careers. Dorothy lives with her grown daughter, Jenny, and with a fifteen year-old girl she is caring for, Abi. Jenny’s daughter Hannah is a student at the university, and Hannah’s girlfriend Indy works for the funeral home as well.

With such a strange juxtaposition of careers running through the same family and the same establishment, it is fitting that the directions taken by this novel are far from the typical fair of mysteries. Sometimes the funerals and the cases overlap. A woman buries her mother. At the funeral, the woman’s children ask Jenny to investigate whether she is being killed by her assistant. Hannah’s university contacts lead to another case: a graduate student thinks he is getting pranked by someone sending Morse code signals masquerading as signals from another planet. Dominating their attention though is the discovery of a human foot by their dog, Einstein.

That and the wild jaguar prowling the parks of Edinburgh. If a team of women running a funeral home and a private investigative agency were not surprising enough, perhaps a black jaguar running loose in Scotland is what you were looking for.

Doug Johnstone creates a plot with touching moments, wry humor, and unexpected twists. The dog is named Einstein because it does not get along with the family’s cat. The cat is named “Schrodinger,” and since the two scientists did not get along…well, it made sense. Indy’s grandparents arrive unexpectedly from India. They are quite fine with the women’s relationship, but they have their own agenda to pursue. The woman whose children want her assistant investigated is having a passionate relationship with that assistant, a man decades younger than she. There are other threads running through the book, but that is more than enough to give a taste of the complexity of the book.

Delightful to this mystery reader, almost none of the plots went the way I expected. Furthermore, the funeral home and the PI business fit together much more neatly than I could have imagined. Fortunately, the limits of my imagination do not constrain the gifts of Doug Johnstone. The Skelfs are amazing, the story is incredible, and the city of Edinburgh is lucky to have such a showcase.

Our thanks to Anne Cater of Random Things Blog Tours for our copy of The Great Silence, given in exchange for our review. The opinions here are solely those of Scintilla. For other perspectives on this novel check out the other bloggers on this tour.

One thought on “Blog Tour: The Great Silence, Doug Johnstone”