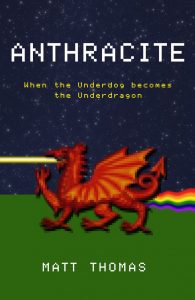 Anthracite is the cyberpunk, alternate universe, time traveling, comedic sci-fi, Welsh domination novel that the world has been waiting for. Like me, you may not have realized that the world was lacking this novel, or appreciated how much we needed it. But now that it is here, it has filled that gaping absence in our reading.

Kevin Jones has struggled with the basics of life. Things like holding a job. Maintaining a relationship. Moving out of his mother’s house. He wants to be a novelist, he intends to be a novelist, but somehow the world does not appreciate his art. So he spends time in the library researching his novel, daydreaming his life away.

One day, Gwen shows up in the library, takes him by the hand, and propels him to the elevator in the back of the library. Much to Kevin’s surprise and alarm, the elevator doubles as a portal to a parallel universe. In this parallel universe, Wales is the world’s dominant superpower. Driven by the engine of the zero-emission perpetual energy J-Drive invented by Isaiah Jones, Wales has risen to lead the world and the Jones Corporation leads Wales. In his own universe, Isaiah Jones is Kevin’s grandfather, an elderly man who never invented a thing in his life.

In this universe, Isaiah Jones never had children. Or grandchildren.

No one is quite sure why the two universes took such divergent paths. Or why Isaiah Jones had such different lives. But in this universe they are convinced that Kevin Jones is vitally important.

Important enough that he should be killed in any universe.

What follows is a madcap trip through a world where technology has taken Wales to unprecedented heights, where the Jones family leads the most powerful corporation in the world, and where a young ne’er do well Kevin Jones finds himself at the center of an adventure he has not the wits nor stamina nor skills to survive. Still, he has Gwen on his side, he must have gotten something from the mythical figure of Isaiah Jones (even if it is from the wrong universe), and the book would be much shorter if he died when by rights he should have. Like, the first chapter.

Matt Thomas has taken multiple tropes and dropped them on their heads. Kevin Jones is not a hero. He is not an anti-hero. Kevin Jones is much more of an un-hero. He is physically weak, mentally weak, more than a bit of a jerk, a smartass, and a magnet for trouble. The fact that Thomas somehow makes him likeable is a testament to the writer’s skill. Jones does grow through the novel (thank God!). Still, he is not anyone’s idea of a hero meant to save the multiverse–and he would be the first to refuse to sign up.

Anthracite is creative, funny, and very different from your usual sci-fi fair. And face it, you may not have known you needed a sci-fi comedy with an un-hero saving the multiverse where Wales is the dominant superpower, but before now you didn’t have it available. Now that you do, it would be a shame to allow that hole to remain unfilled. 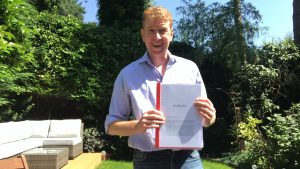 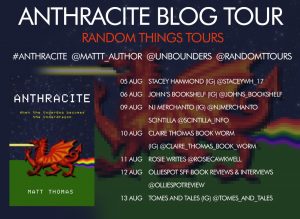 Our thanks to Anne Cater of Random Things Blog Tours for our copy of Anthracite, provided in exchange for our review. The opinions here are solely those of Scintilla. For other perspectives on this novel, check out the other bloggers participating in this tour.