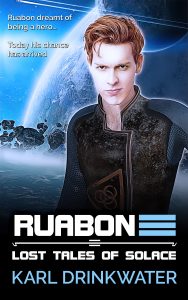 I have this mental image of Karl Drinkwater having created this amazing playground called “Solace,” where the main attractions are two novels featuring a talented and dangerous woman searching for her missing sister with the help of a sentient AI ship. As the author looks over his creation, he notices that there are some interesting but unfinished bits hovering around those main attractions. Instead of ignoring them to concentrate entirely on building the main structure, Drinkwater allows himself to play with those bits, shaping and forming them into small but fascinating side pieces that add depth and character to the overall universe even if they do not specifically advance the overarching story of the novels.

I mean, if you’ve created an entire universe to play in, why not play in it?

Ruabon is one of those side stories, a “Lost Tale of Solace.” In one of the novels, the characters successfully fake their own death/destruction in order to throw their pursuers off track. This event in the novel is an extremely small part, more a passing memory than an actual plot point. But, what if for some of those participating in the event, it was not a plot device? What if it was a central event?

Ruabon is a lowly tech, monitoring a station run by the USF, the corporation/government that dominates many planets. His own planet had been the victim of a hostile takeover by the USF. Like many of his fellows, he is just trying to keep his head down and survive in an unfriendly reality, governed by unfriendly foreigners.

One day Ruabon notices something strange. He sends a bot to investigate. That bot is destroyed. Other investigating bots are also destroyed, and he soon finds himself in the middle of an adventure that finds him at the center of a search and capture mission for one of the most wanted criminals in the galaxy. This could be his chance, his opportunity to make a name for himself, to get away from his defeated planet and his menial job, a chance to be noticed for his talents and become more than he ever thought possible.

Reaching for the stars can be amazing if you succeed. It can be deadly if you do not.

Karl Drinkwater has created a universe where the dominant corporation favors conformity. People of different races are subjugated. Individual thought and creativity are not encouraged. Stepping out of one’s role is dangerous. Succeed and you might be rewarded, unless someone else claims credit for your success. Fail, and you are done. Permanently. These themes are on full display in this “Lost Tale.” Even though as a reader of the whole series I know the overall outcome of the event, I found myself pulling for Ruabon. I wanted this quirky, geeky programmer to succeed. I wanted to get to know his sentient bots better. I wanted to see him get the girl. I wanted to see him rise above his allotted place. 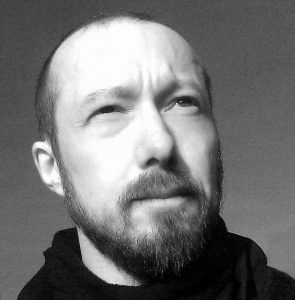 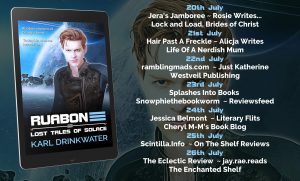 Our thanks to Rachel Gilbey of Rachel’s Random Resources for our copy of Ruabon, given in exchange for our honest review. The opinions here are solely those of Scintilla. For other perspectives, check out the other bloggers participating in this tour. 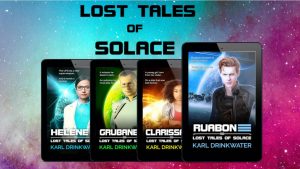