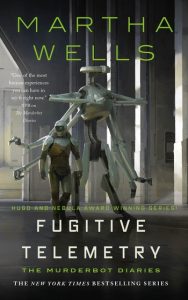 The Sec Unit also known as Murderbot is dwelling on the Preservation space station where its job is keeping its friend Mensah safe from assassins. Whenever possible, it is also keeping up with learning the ways of humans by watching endless hours of video entertainment.

When a body is found on the station, Mensah insists that Sec Unit assist the local investigators. Murders are very rare on Preservation…and as its name may imply, Murderbot has had some personal experience with deceased humans. This particular deceased human was not killed by Murderbot–if it had done so, it would have disposed of the body somewhere that it would not be found. (And no, it won’t tell you where that is.) Despite their great reluctance, the station inspectors agree to its help: Mensah has the authority and the attitude to get her way.

The Murderbot Diaries is a brilliant series of five novellas and one full-length novel. Sec Unit is smart, sarcastic, reflective, and quite the outside observer of the human condition. Having once been co-opted by outside agents to kill innocents, it has taken control of its own programming and tries its best to avoid killing people when possible. Of course, if they are trying to kill its friends, it is willing to make an exception. Still, it is capable of incapacitating humans quickly and precisely with less than lethal means and still get done in time to watch another episode of its favorite series.

Easily one of my favorite series, Fugitive Telemetry is a fast read with an enjoyable plot and an always delightful protagonist. If you enjoy sci-fi with action, robots, sarcasm, and introspection, this series was written for you.