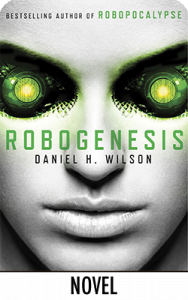 The war is over. Archon has been destroyed. Humans and AI can work together to recover and rebuild.

Except, nothing is quite what it seems to be.

A pulse escaped Archon right before its destruction. A supercomputer in Russia begins operating strangely, No longer fully cooperating with the scientists and programmers, it begins speaking to its maintenance engineer via holographic images of an elderly Russian man and a teenage American boy.

Mathilda and Nolan Perez are still living in what’s left of New York City. The Underground movement survived the war. It did not survive the aftermath. Thousands of refugees are returning to the city, organized and led by a former gang leader. They are committed to killing anyone who was physically modified by Archon–people like Mathilda, whose eyes were replaced by a cybernetic optical device.

The remnants of the Ghost Army march home. Along with them march some former soldiers whose bodies were commandeered by “parasites,” robotic devices created by Archon designed to capture human minds and bodies and use them against their former comrades. Although Archon is no longer guiding these parasites, they are clearly physically more machine than human, and the humans in the army do not know whether they can trust them. This mistrust grows as one of the humans becomes more and more swayed by a mysterious box that talks to him, promising him power if only he obeys the box’s commands.

A warning goes out to the world: Archon was not the only threat. It was not even the worst threat. And this new threat intends to destroy everything.

Wilson’s sequel to the amazing Robopocalypse takes characters and themes from the first novel and moves them forward through new threats and challenges. A narrator introduces each chapter, a narrator whose identity is revealed through the course of the story. A new world has replaced the world that we know. This new world is inhabited by humans, enhanced humans with cybernetic implants, AI devices that used to be human before the “parasites” took over their bodies and their minds, cybernetic life forms that have both organic and manufactured bodies and guidance systems, and fully manufactured creatures that seem to be coming from unknown sources.

Like the previous novel, Robogenesis has a thriller’s heart beating with a scientist’s mind and an adventurer’s soul. Some of the questions that were asked in the first novel get fleshed out in this one. What is “life”? What is “human”? Can a machine become “alive”? Can robots “feel” emotions? These might be questions many people have asked and are asking, but in the hands of robotics and AI expert Wilson, they are plumbed with both extraordinary insight and a deep compassion for all of his characters, human and AI and other.