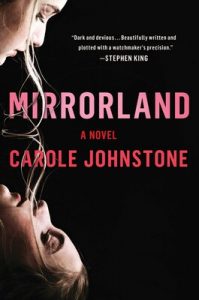 A fascinating choice for any novel is relying on the unreliable narrator. I may never see it done better than Carole Johnstone has done in her debut novel, Mirrorland.

Mirrorland is a hard novel to categorize and I am not sure it is even worth trying. Catriona “Cat” Morgan has been living in Los Angeles ever since leaving Edinburgh, Scotland, some 12 years before. Early in the novel we learn that she left after a falling out with her “mirror” twin sister Ellice. The details of that falling out figure prominently in the story, which flashes back to the girls’ childhood living in an old house and playing in a part of the house they called Mirrorland.

Cat is returning to Edinburgh following the disappearance of Ellice. She had sailed out on her boat but never reached her announced destination. Both the boat and Ellice were missing and as time goes on, hope for her safe return diminishes.

The book is essentially told from Cat’s perspective, and things get very weird very fast. Cat’s memories of Mirrorland include real people: herself, Ellice, Ross–the boy next door who becomes Ellice’s husband after they all grow up. They also include make-believe characters: Annie and Mouse, clowns and pirates, a witch and Bluebeard and Blackbeard and the hoped for return of Captain Morgan.

But as the book develops, we find that Cat’s memory cannot be trusted. Some of those make-believe characters are actually real people, people she had relegated to a fiction section of her mind. Some of them were known to her in other contexts: an aunt, her grandfather. We begin learning that her memories of her sister are also corrupted, as are her memories of her brother-in-law and of the rest of her family. Even the house itself holds secrets that are locked into the fantasies she’s told herself.

For much of the book, I could not tell whether it was a fantasy novel and her memories were real, filled with pirates and clowns and danger as they visited an alternate world; or whether it was a mystery and nothing she said or thought could be believed. In some ways it is both. In both ways, it is excellent.

Mirrorland is a dark and disturbing read, with a narrator whose grip on sanity is at best tenuous and whose memories are hard to trust. It is also a book with power and presence and a stellar debut for the author. 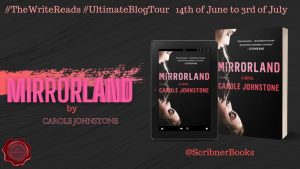 Our thanks to The Write Reads and Scribner books for our copy of Mirrorland, given solely in exchange for our review. The opinions here are solely those of Scintilla. For other perspectives, check out the other bloggers participating in this tour.