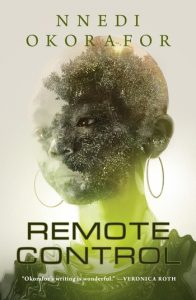 Nnedi Okorafor is one of the masters of the novella. Her 2020 work, Remote Control, gives readers everything they love about her writing with a brand new character facing a very different world.

Sankofa walks the roads of Ghana. Only fourteen, she looks even younger. Sankofa was not her birth name. She had forgotten that name in the pain of losing everyone she loved, everyone she knew. So now she walks the roads from city to city, accompanied by a fox, stopping at houses and welcoming their gifts of food, drink (room temperature Fanta, please), and clothing. Occasionally she gives a gift herself when asked. If someone is ill, in desperate pain, dying from cancer or another disease, they can ask Sankofa and she gives them what they most crave: release.

As a younger child, Fatima lived with her family. An alien “seed” landed beneath the tree in her backyard where she played. She took the seed in her hands and it changed her. She glowed, green. Technology died at her touch. She no longer became sick, and things which sought to harm her died. When a truck barrels at her in an intersection, though, her power takes an incredible leap. Everyone in her town dies.

Everyone. Her parents. Her brother. Her teachers. The entire town dies. And Fatima loses her memory and becomes Sankofa.

Remote Control is less about plot than it is about the journey. Sankofa is seeking answers. She knows that a one-eyed man has taken the seed. She is trying to find it, to see whether it can explain how she came by these powers. She tries to control her power, to use it only when needed and only as much as needed. In the process she wanders through a Ghana that is both familiar and future: farms watched over by drones, gigantic robots directing traffic, a mysterious American corporation also trying to find the seed and possibly capture her. In the process she grows and matures, finds family and acceptance and strength and loss, and becomes a symbol to her country as the “adopted daughter of the Angel of Death.”

This is a story that works on many levels. Younger readers will love the strong and mysterious Sankofa, cheering for her as she journeys to find the seed, to find herself, to find her reason for being. Older readers will appreciate the craft of Dr. Okorafor’s writing, the deep and multi-faceted imagery within the text, the powerful child becoming a more powerful young woman. Remote Control turns to all the right channels.