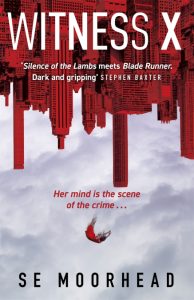 Kyra Sullivan is an expert in the human brain. So much so that she and a partner have designed a device that can allow one person to “see” the memories of another, using a combination of VR, nanotech, and high-speed computers. As a former police profiler, Sullivan anticipates her tech being used by law enforcement to stop crime, catch criminals, free the innocent, and convict the guilty.

She has more than a professional interest in this use. Her sister was murdered fourteen years ago, in 2019, by a man known as the “Mizpah” killer. Mizpah necklaces are popular, especially in evangelical circles, to express love for another. They are medallions in the shape of a broken coin. When held together, the coin has the Bible verse which says, “The Lord watch between me and thee when we are apart one from the other.”

(Total side note, and this is not the author’s fault because she absolutely uses the coins in the story effectively, but this is not a sweet romantic verse. Essentially the verse is saying, “you had better keep your end of our contract even though I can’t watch you 24/7/365, because God is watching and he’s gonna get you if you try to cheat me.” But that’s the theology nerd in me coming out and has nothing to do with the novel.)

A man was arrested and convicted of the murders fourteen years earlier. David Lomax maintained his innocence, but he was a violent man with a history of abusing women, his DNA was on some of the victims, and a mizpah was found in his apartment. Sullivan had some doubts about his guilt, but since her sister was one of the victims she was not allowed to participate in the final stages of the investigation or in the trial, and her doubts were never taken seriously by the police.

When Lomax escapes custody, Sullivan is scared both for herself and her family. Lomax had threatened to come after them when he was arrested, and she takes that threat very seriously. Worse, shortly after his escape, another body is found bearing the same signature left by the Mizpah killer all of those years before.

Witness X is a powerful thriller, racing from event to event. It has a terrific plot. That, however, is not the magic of the novel. The incredible nature of this novel is the development of the character of Kyra Sullivan. S.E. Moorhead introduces us to a brilliant, if somewhat obsessed, scientist. She is committed to her work, committed to her cause, and willing to take risks to advance the work in the way she believes it should go. Among those risks are being the person who views the memories of the other party. Despite precautions, despite testing, despite failsafes, allowing another person’s psyche to intrude so deeply into hers leaves scars. She has dreams about things the other person has seen. She has memories that she knows are not her own. As she gets into the project more and more deeply, those dreams and memories become hallucinations. She “sees” the victims. She “sees” her sister. She “sees” things that are not there. Catching the killer may demand more than her dedication. It may require her to sacrifice her sanity itself.

This is an intense book. Far from being one I could not put down, it was one I had to put down at least once as I had a physiological reaction to the action on the page. My breath was short, my heart was racing, and my hand was gripping my phone with the Kindle app. After a few minutes to reset myself, though, I dove back in.

This was hard for me to believe, but Witness X is S.E. Moorhead’s debut novel. A stylish and intense sci fi thriller, it is easily one of the best books I have read so far this year.

Our thanks to author S.E. Moorhead for inviting us to review her book and providing us with a copy for that purpose.