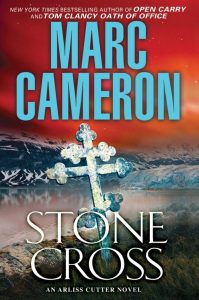 I grew up in Denver, Colorado. Through the years I have lived not only in Colorado, but in Ohio, New York, and Pennsylvania. All of those are places known for their winters. Cold, snow, and wind have been with me most of my life.

Don’t tell anyone, but I hate winter. I don’t like being cold. I don’t like getting wet. I don’t like slipping on ice. I may make fun of people who complain about cold temperatures and snowy weather in January, but secretly…secretly, I am those people.

Still, an adventure set in Alaska can warm me up quite well. Arliss Cutter has more reason to hate snow than I do–he grew up in Florida. When his brother died, though, Cutter moved to Alaska to help raise his niece and nephews. Fortunately his job with the US Marshals allowed him to transfer to Anchorage.

In Alaska, though, all branches of law enforcement work together. Cutter and his partner are tasked with protecting a judge who has received a threatening letter. When he travels to a remote village to arbitrate a dispute, they go along with him. While they are there, a local couple is kidnapped and a man is murdered. Since there is only one law enforcement officer in the area and a violent storm is covering the region, Cutter and his partner are forced to step in and investigate the crime while still protecting the judge.

Cameron has lived in Alaska for years and has an extensive background in law enforcement. This personal experience gives a great deal of power to his descriptions of Alaskan policing, Marshal’s service, rural Alaskan life, and the challenges and discrimination faced both historically and currently by the native peoples of the state. “Dry” counties in the state face the resourcefulness of people who make homemade alcohol. Domestic violence, sexual abuse and rape, desperate poverty, hopelessness, and the challenges of weather and darkness make parts of rural Alaska painful places to live. They have incredible beauty and offer many people the chance to live the kind of free life that many others can only dream of. But they also beat down those who struggle to survive. Winter is merciless, and sometimes the people who live with it become merciless themselves.

As you may have already gathered, the protagonist may be human but another major character in the book is Alaska. Cameron’s descriptions of the beauty and the harshness, the darkness and the icy fog, the tundra and the taiga, bring the scenes to life. He is just as vivid in his descriptions of the people, not so much their appearance but their character. He is sensitive to the racial and ethnic components of the characters, particularly the Native Alaskans, but not in a way that is pitying or aggrandizing. They are people, people who sometimes overcome challenges and who are sometimes overcome by them. Cameron does not try to pretend he knows what it is like to be a rural native Alaskan, but his writing is clearly informed by long and close relationships with people who do know.

A thriller and an adventure set in the last untamed American frontier. A good plot, and amazing setting, strong characters, and solid writing. The Arliss Cutter series has the chops.