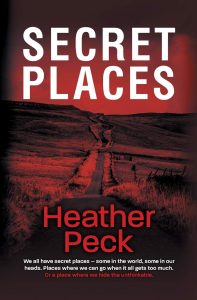 Certain genres seem to lend themselves to a formulaic approach. Mysteries and police procedurals have their tropes: the grizzled investigator who has terrible relationships, the hardened criminal who is clearly guilty but hoping to magically escape judgment, etc. One of the majesties of Alfred Hitchcock was his willingness to throw expectations out the (rear?) window.

One of Hitchcock’s many masterpieces was the movie Rope. Following an intriguing cinematic formula, the story took place in real time and appeared to be taken in a single camera shot. Hitchcock used tricks like close-ups on a character’s back as the camera panned (allowing the camera operators of the time to change film while the actors froze in place until the action began again). The result was an almost seamless revelation of the story, with both celluloid characters and living audiences appearing to learn things together.

I was reminded often of Rope as I read Secret Places by Heather Peck. Obviously there are significant differences between a film noir and a novel. But Peck shifts quickly and seamlessly from perspective to perspective, allowing the readers to see the investigation unfold from the view of the police, the suspects, the actual perpetrator, and others with a connection to the plot. The basic plot device is simple enough: archeologists discover human remains in a hidden World War II bunker in Yorkshire which had been used as a dumping site for dead farm animals. The body has been there no longer than a decade, meaning the death occurred long after the war had ended. The farmer who owns the land denies any knowledge of the body. The previous owner of the property cannot be found. Police need to find out who the dead person is, who may have wanted him dead, and the other typical questions investigators ask.

Peck brilliantly shifts from the grizzled (yet happily married) lead detective to the worried farmer whose life has been upended to the farmer’s friends who are supporting her during this challenge to junior investigators assisting on the case to the previous landowner to even the victim himself. Like a close up of the back of a man’s suit, the transitions sometimes flow without an obvious break from one perspective to the next. The presence of “tourists” visiting the scene of the crime may get commentary from the police and from the farmer and from her friends. Each perspective provides a new focal point on the immediate action as well as opening new windows to reveal the overall story. Unlike some other contemporary authors (whom I have also reviewed), Peck uses long chapters to bring depth to the scene and to the plot. The result is a wonderful collection of lenses that eventually focus on the trial and verdict and shocking twist at the end of the book.

Secret Places is about a body in a secret place. But it is also about the secret places we keep within ourselves, those hidden areas of our psyches that either prevent us from going insane or possibly cloak the insanity that strives to escape. The book may reveal both of them, but the real joy of exploring secret places is not just the discovery but also the search. This is a book I will savor thinking about for a while. 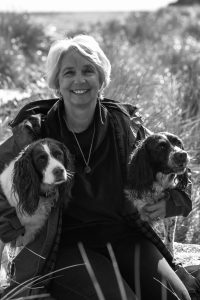 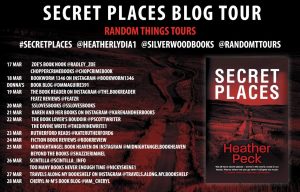 Our thanks to Anne Cater of Random Things Blog Tours for our copy of Secret Places, given solely in exchange for our honest review. The opinions here are solely those of Scintilla. For other perspectives, check out the other bloggers on this tour.