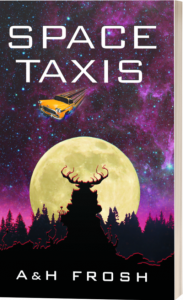 With a title like Space Taxis I was expecting a humorous sci-fi romp. I was not expecting a book of surprising depth and heart that gave both an alternate history of earth and a clever sci-fi everyman turned hero.

Michael Redolfo has never really fit in. Bullied in school, awkward in relationships, the only place he really feels at home is behind the wheel of his checkered yellow cab driving the streets of his native Brooklyn. When he wakes up in a holding cell on the planet Vost, he is a bit surprised. In what quickly proves to be an unfortunate case of mistaken identity, he was detained as part of an interstellar hunt for an escaped prisoner. Although he is quickly released, he is forced to earn his way back to Earth.

The good news is that he was not brought to Vost alone. His cab was also taken. Given a chance to work his way back home, he and his cab are hired by a local outfit. In some ways driving a cab on Vost is different than driving in Brooklyn. For one thing, cars fly. So do buildings. Still, a little refitting of the car, and Mike is good to go.

Parallel to Mike’s story is a story from Earth. A young Czechoslovakian Jew and her fiance are eager to flee the occupying Germans during the latter part of World War II. Somehow, despite their excellently forged papers, the Germans are aware of her ancestry and pursue them. Although her main concern is for her baby, her fiance attracts the personal attention of Heinrich Himmler who will stop at nothing to capture them.

It would be very easy for the authors to lose track of this multifaceted story. They don’t. The story of the young couple, woven neatly with historical figures such as Himmler, is powerful and poignant. Although astute readers will guess at many of the connections between the stories early on, the writers allow the plot to unfold naturally. Actual historical mysteries from the era, particularly unaccounted changes in behavior by certain Nazi figures, are given an explanation within the story. While the actual history may not really involve alien influences changing the course of the war, the concept is well done.

Mike Redolfo is an absolutely delightful character. Gritty Brooklyn cabbie, he finds himself growing from being the “alien” on his own planet to finding acceptance and friendship and more on a distant planet. Although he gets caught up in planetary battles between indigenous species and the settlers who put them on “reservations” (the book is not really subtle in its metaphors), despite being drawn in to the criminal activities of a gang who needs a driver, he never seems to be in over his head. As the character develops through the book, he becomes more and more enjoyable and well-written.

Space Taxis has a deceiving name. It’s quite accurate in one sense: there are space taxis in the story. But the name has a whimsical feel, belying the actual depth and poignancy of the novel. I really liked it a lot. 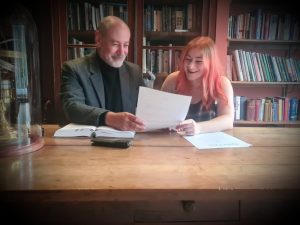 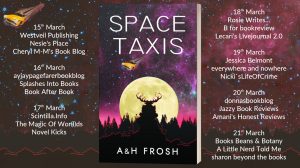 Our thanks to Rachel Gilbey of Rachel’s Random Resources Blog Tours for our copy of Space Taxis, given solely for our participation in this tour. For other perspectives on the book, check out the other bloggers on this tour. The opinions here are those of Scintilla.