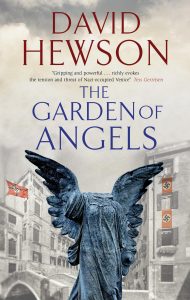 Paolo Uccello is dying. Having used his years building up the fortunes of the family’s Venice-based weaving business, he has one last thing to do: Tell his story.

His grandson Nico has been suspended from school. A “friend” of his was caught bullying a Jewish classmate while Nico stood by and did not intervene. His schedule suddenly empty, he visits his grandfather in the hospital every day.

The Garden of Angels pulls you inexorably into its drama. There are two stories being told in parallel: Paolo’s very personal recollections of Venice and Nico’s equally personal reactions to the story being told. Each story informs the other, though obviously the history as read by Nico has the more immediate effect on Nico. Still, we feel Nico’s reactions throughout the historical portions: admiration, disgust, revulsion, fondness, despair.

There is much history in this novel that was unknown to me. I of course knew of the pogroms that slaughtered Jews by the millions throughout central and eastern Europe. I was not really aware, though not surprised, that they had extended into Italy as well. Collaborators with the Nazis were not surprising. I knew of them. But the presence of a Jewish collaborator charged with rounding up other Jews for the ovens caused a visceral reaction. On one level I was not surprised. Venality is hardly a rare trait. I realized that I had mentally refused to believe that such traitors existed. Garden opened my eyes.

Which is, of course, part of the majesty of well-crafted fiction. David Hewson could undoubtedly have turned his research into a history of Venice during the period. A city torn between Nazi occupiers, allegedly enforcing the will of Mussolini but in reality cementing the control of Berlin, and the advancing American and British armies coming up from the south. But I doubt I would have read that. I would have been interested and I’m confident he would have made it interesting. It still would have had a very small audience.

Fiction, though, allows you to share stories with people who might never pick up a book of history. Fiction shares truth through the windows of stories. Humans are people of story. We are each protagonists in our own tales, heroes and villains, saints and sinners, not always at the center of the action but always in the center of our own narrative. Paolo and Nico resonated with me because of their stories. They came to life in my mind. Their stories shaped my thinking, expanded my knowledge, touched my heart, and reshaped part of my mind.

The Garden of Angels is outstanding. I am not the same person that I was before I read the book. The events may be dark, the truths hard to face, the choices made might not be the choices you would make. But the power of this book is undeniable and the characters may prove to be unforgettable. 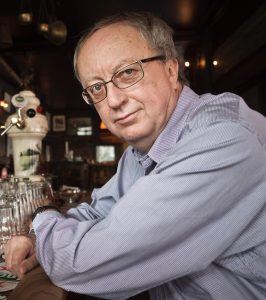 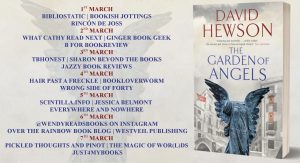 Our thanks to Rachel Gilbey of Rachel’s Random Resources blog tours for our copy of this book, given solely for our participation in this blog tour. For other perspectives on The Garden of Angels, check out the other bloggers on the tour. The opinions here are solely those of Scintilla.

Also listen to Richard Armitage narrate a reading on https://www.youtube.com/watch?v=0yvK5szZ418&feature=youtu.be