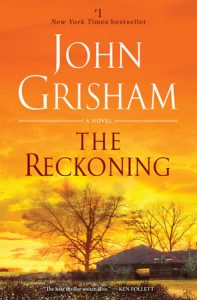 Pete Banning may be the most prominent man ever to come from Clanton, Mississippi. A decorated war hero, he survived the Bataan Death March and Japanese imprisonment, escaping to participate in the armed insurgency against the Japanese alongside Filipino volunteers and Allied soldiers who had either avoided capture entirely or had also managed to escape captivity. Wounded multiple times and reported to his family as dead, he returned home to a hero’s welcome. As a decently well-off landowner, his family ties to the community went back over 100 years.

So why did he take his gun, go over to the Methodist church, and shoot the pastor dead?

They will not get them from Pete Banning.

This may be John Grisham’s best work yet. It is a grim story, with characters who each have their ethical and emotional challenges. There is no doubt at all that Pete Banning was a hero. So why did he murder a popular minister in cold blood? Did it have something to do with his wife, an inmate at a psychiatric hospital? Did the horrors of war finally crash over him and cause him to snap? Pete’s only response: “I’ve got nothing to say.”

As most of Grisham’s works do, the courtroom scenes and legal arguments are compelling and have a very realistic feel to them (evaluating as a layperson who has never witnessed an actual trial). The strongest part of the novel, though, may be the middle section. Grisham’s descriptions of the war in the Philippines are brutal and horrible. The starvation of the troops, the forced march where hundreds collapsed and were then shot and left by the side of the road, then finally the arrival in the camp where sickness and hunger took many hundreds of additional lives. War injuries are usually brutal, and infection, dysentery, and malaria were constant threats along with the hunger and thirst in the prison camp.

One thing potential readers should be aware of: the cover should probably be covered with trigger warnings. Obviously murder, but the character’s racial attitudes are true to the time but definitely painful to read today. The scenes of war and the descriptions of starvation, injury, death, and illness are quite vivid. Capital punishment figures prominently in the book. If these are things that would distress a reader then that reader should probably avoid this novel.

For readers who choose to face the challenges in the story, look forward to a brilliant plot and one of the deepest and most complex characters you will ever find in fiction. Pete Banning is a hero and a murderer. He is loving and merciless. He is compassionate and generous but also cruel and unforgiving. By the end of the novel, the reasons for his actions are crystal clear. Whether they are justified or not is a very different question.