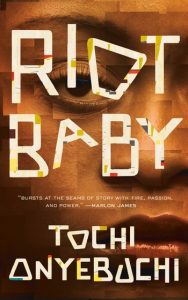 Ella and Kev are brother and sister. Born in Los Angeles, they move with their mother to Harlem after the LA riots of 1991. Ella has extraordinary gifts. Able to see the future, able to move matter, and able to transport herself both physically and psychically, she could transform the world. Tear it down and build it up again. Her power may be uncontainable.

Kev wants to help her contain it, but his own battles keep him sidelined. Pulled into gang activity in Harlem, he ends up spending eight years in Rikers Island. Although Ella visits him frequently, both in physical visits and in psychic appearances, she is basically forced to learn her powers on her own.

This is a short book and I don’t want to give too much of the story away. It is a story by a black man about a black family. Perhaps it is more fair to say it is a story by an angry black man about an angry black family. This book is powerful and fierce. Its prose is tight, unsparing, unafraid. Tochi Onyebuchi is angry about the state of African Americans. His characters are angry. And his characters can burn it all down.

Most books are written for a general audience. Publishers like to sell books. That’s what they do. Books that appeal to the mainstream sell more copies than books aimed at a niche audience. Obviously there are many books for those niche audiences, but nowhere near as many as those trying to cast a larger net and pull in a wider selection of readers.

I don’t think Tochi Onyebuchi gives a damn whether his book reaches a white audience. He is expressing black power, black resentment, black vengeance, black suffering. Most of the characters are black. The dialog is from the urban centers of America, especially New York. The emotions are raw, the experiences are sometimes brutal. Onyebuchi grabs hold of an exposed nerve and allows the pain to flow through his writing. It is not an easy book to read, especially for this middle-aged white man.

We are allegedly engaging in a national conversation about race following the murder of George Floyd. I wish I believed that was actually happening. What seems to be happening instead is that some people are crying out to be heard, and a few people are listening. More and more, though, I am sensing white people turning away. They don’t want to see the pain and suffering and injury and mistreatment. They want to have the conversation on their own terms. Rather than engaging with a history of abuse and neglect, with the legacies of slavery and Jim Crow, white people want to pretend that history completely reset at some magical point, maybe in the 60s, and since then any possible issues black folks have is completely their own fault. After all, “We gave you equal rights: what more could you expect?”

Riot Baby is a necessary book. I am very glad I read it. I hope the people who do read it are as moved by it as I was. Sadly, the (white) people who most need it will either never pick it up or will never allow it to work within them. And when the next public execution of an unarmed person happens, and the next wave of anger sweeps my country, those same people will lament from their gated suburban enclaves or verdant rural farmscapes the divisiveness of “those people,” never acknowledging their shared humanity or their personal responsibility.