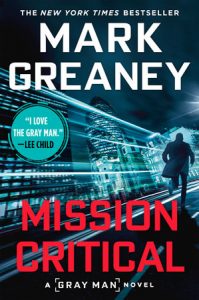 Regular visitors to this blog (Hi, Mom!) will know that we like thrillers and we especially like the over-the-top thrillers that take us around the world and feature bad guys who plan to end civilization as we know it. After all, if you’re going for popcorn reading, you might as well go for the large bucket.

However, there are thrillers and then there are THRILLERS. Mark Greaney consistently delivers the latter type. His Gray Man series is well written, well plotted, and as the series has developed the characters have grown deeper and richer. It is one of those series where, when I see the latest book in the library (back in the pre-pandemic days when we visited the library in person), I drop everything else on my TBR pile and pick it up. Because of not going to libraries and bookstores as often, I seem to have fallen a book behind–a situation that cannot be allowed to stand!

But, back to the review of this book. Court Gentry, the Gray Man, has been summoned to DC. Since a CIA transport is near his location on another mission he is ordered to catch a ride. The transport has one stop to make: dropping off a prisoner in England. Somehow that mission is compromised. Attackers successfully kill most of the agents and capture the prisoner. They were not accounting for the Gray Man though. He kills several of the attackers and pursues the van fleeing with the prisoner.

Russian agent turned CIA asset “Anthem” is being kept as a “guest” of the CIA in Virginia when she sees a photo that changes everything. It is a picture of her father’s body, taken when he was killed in action in Dagestan. Something about that picture tells her she needs to take immediate action. Before she can escape, though, armed men storm the CIA safe house and try to kill everyone there. She manages to kill some of the attackers, save one of her guards, and escape herself to find out the secret behind the picture of her father.

Mission Critical is terrific. Zoya, aka Anthem, is a worthy partner and contrast to the Gray Man. Neither of them play well with others. Teamwork is hard for solo operators. Yet they find in each other companion spirits, loyal to a higher calling than money or politics or themselves. Both are willing to do “wrong” in order to achieve “right,” but both have lines they will not cross regardless. Each of them can kill without losing a moment of sleep, but neither of them will kill innocents even if it means that an evil person will escape to cause more evil.

And if the action is a bit over the top, if the body count climbs in almost every chapter, if the good guys survive against impossible odds and the bad guys go down (in one case) via a lucky ricochet or a conveniently positioned iron gate dropping on (or more accurately through) them, that just adds to the legend of the Gray Man. Even he cannot really believe the things he has escaped. I cannot believe that Mark Greaney continues to think of more trouble for him to find, more madmen for him to confront, and more scrapes for him to escape. I hope that my life never resembles a Mark Greaney novel. I would be the sacrificial victim in chapter 1 whose death may spur the Gray Man into action but who could not survive long enough to meet the spectre himself.

For fans of the thriller genre and especially those who have already discovered this series, Mission Critical is a thrill ride which may be the best Mark Greaney novel I have read–and that is saying a lot. We see new sides to old characters, get to visit with some characters returning from previous books, and find new depth to the protagonists. This is a series with legs that could keep going for many more years. I, for one, hope it does.