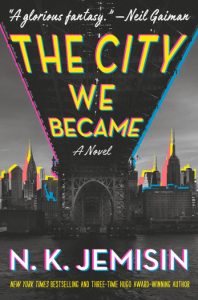 N.K. Jemisin is the first person to win the Hugo Award for Best Novel three years in a row. In 2016 she became the first African American writer to win the Hugo in that category. In a relatively short time she has gone from being one of the best SFF writers to being simply one of the best living writers. Her next trilogy, The Great Cities, begins with an amazing fantasy about New York City: The City We Became. After reading it, I am awestruck.

A young multiracial man, perhaps 20 or so, begins creating street murals that show a New York of dreams–or maybe nightmares. Soon, he begins living this nightmare himself. He sees things that others cannot see, responds to stimuli others do not notice, and eventually faces an attack on the Williamsburg Bridge from a creature that almost no one else can see. He survives. Barely.

Within hours, a few others begin to see and experience similar things. A newcomer to the city, going by the name of Manny, can no longer remember his life before arriving in NYC. He knows, though, that he must get to the FDR highway, where he fights another creature that is invisible to most of the other drivers.

A Lenape woman named Bronca faces her own battles in her Bronx community. Brooklyn, an African American borough councilwoman and former rapper, gets summoned into Manhattan to rescue Mannie. A young Indian immigrant uses mathematical teleportation to face a monster rising from a backyard pool in Queens. And Aislyn faces both monsters outside and monsters within her home and within her self as she listens to the siren call of the city from her home on Staten Island.

I married a New Yorker and lived for a year and a half on Staten Island myself (and like many other Staten Islanders, I worked in Manhattan). It is perhaps not surprising that in a book where the city literally comes to life, the setting is a powerful character itself. Jemisin knows the people, knows the neighborhoods, knows the thrall the city holds over those who love her. The five boroughs are tightly intertwined, yet in some ways are almost five separate countries. They may share a common language and a common city government. They may work in one borough and shop in another and dine in a third and live in a fourth and go to church in the fifth, but the people there are fiercely territorial. If an outsider asks, “Where are you from,” the easy answer might be “New York City.” But if another New Yorker asks, the answer is much more specific: Bay Ridge or Upper East Side, Staten Island or Jamaica. These differences and rivalries create a rich landscape for Jemisin’s novel and she employs it dynamically and flawlessly.

The City We Became is many things. An homage to one of the world’s great cities. A celebration of multiethnicity. A brilliant fantasy novel. A masterwork by a great writer who is demonstrating that her best work may lie ahead of us. N.K. Jemisin imagines different worlds. We have the extraordinary privilege right now of living in hers.