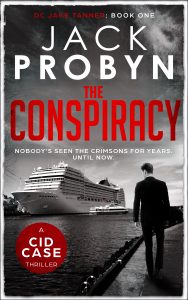 Jake Tanner is an up and coming temporary Detective Constable on his first assignment. Along with his friend Danika, he has been assigned to the Major Crimes division of a precinct near London, where he will learn the ropes of his new job.

That learning process begins almost immediately. A gang has stormed a jewelry store, killed one employee and kidnapped another, and is on the run. Worse, the gang is one Jake knows. The Crimsons had been out of business for a while, ever since their leader was arrested during a heist where Jake was held hostage.

Without their leader, though, the gang has taken a much more violent approach. They had never before killed anyone. They had never even fired their guns in previous heists. Now, they have not only done that, but they have released their hostage with a parting gift: a collar bomb, designed to kill her if the police fail to find the keys to release the device.

Author Jack Probyn has written a smart police thriller with a myriad of twists and turns. Everyone comes under scrutiny. Why did the Crimsons choose to act on the same day, in the same community, as Jake started his job there? Is he somehow involved? Is the woman with the bomb-collar merely an innocent victim, or is there more to it? What prompted the Crimsons to change their approach and act with violence? Many more questions are raised in the course of the book, some of which remain unanswered and give a starting point to the sequel(s).

The central character, Jake Tanner, is a bit unusual as the lead character in these sorts of books. He is a happily married young father. Most (though not all) protagonists in mystery/thriller/police-procedural novels are emotionally wounded grizzled veterans unable to maintain loving relationships with their significant others. I suppose as the novels go forward we may see Jake moving in that direction, but I hope not. It is refreshing to read about someone in a healthy relationship with a supportive partner. We do not get to know Elizabeth Tanner at all, other than to see she is a good wife and mother who graduated from the university where she and Jake met. We also see that Jake is a caring son and brother, albeit now a bit distant from his siblings after entering adulthood. There is the potential for a lot of family drama in healthy families, particularly if/when the job of policing crosses lines into personal lives, and I hope the author chooses to do more with those relationships in future novels.

Probyn also does an excellent job exploring how the Crimsons came to make some of the choices they made. He does not excuse or exonerate them, but there are many times when Jake acknowledges that if he were dealt the same cards by life that they were, he may have been in their shoes instead of his own. This ability to empathize with the criminals helps Jake pursue them. It also raises questions among his colleagues about his own allegiances.

The Conspiracy hints at much bigger things than a heist turned deadly. It is an outstanding entree to what promises to be a dynamic series. Jake Tanner may be young. He is also smart and intuitive. He is likely to need all of those qualities as the books move forward. 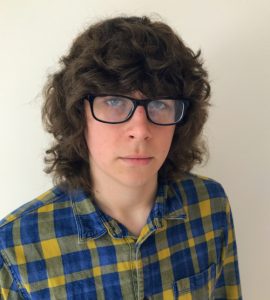 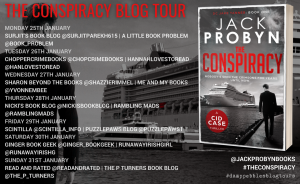 Our thanks to Emma Welton of Damp Pebbles Blog Tours for our copy of this novel in exchange for our participation in the blog tour. For other takes on this book, check out the other bloggers on the tour. The opinions here are solely those of Scintilla.

One thought on “Blog Tour: The Conspiracy, Jack Probyn”