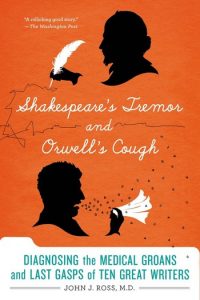 Certain writers’ works are, dare I say, infected with certain maladies. Shakespeare frequently refers obliquely to syphilis. James Joyce has multiple descriptive names for gonorrhea. Tuberculosis affects characters in Jane Eyre and several other works. In many of these famous plays, poems, and novels, the descriptions of the maladies are vivid and the impact on the characters visceral.

From the intensity of the descriptions, coupled with letters and diaries from the writers and their companions, we now know that some of those literary diseases were drawn from actual life experiences of the writers. It’s hard to play doctor across the distances of time and space, so some of these diagnoses are admittedly uncertain. But author and doctor John J. Ross brings a writer’s flair and a physician’s mind to the task.

One sad theme running throughout the book is the reality of medical treatments long being combinations of ineffective herbal remedies and applications of deadly poisons in near (or sometimes fully) fatal doses. Arsenic and mercury were long deemed as appropriate curatives for a variety of illnesses, and it is quite possible that more than one of the writers were unfortunate victims of their own treatments. Furthermore, the positive effects of rudimentary surgical procedures were often negated by the lack of sanitation and anesthetics. Post-operative infections were often more deadly than the original illness, meaning many illnesses carried their own “damned if you do, damned if you don’t” equation into the treatment decision.

Given the nature of both modern medicine and modern celebrity culture, Ross focuses his attention on writers who can no longer complain about their medical status being discussed openly. This is probably especially important given the writers who suffered terribly from mental illness. Again, treatments for depression, bipolar disorder, schizophrenia, etc. were at best sketchy and at worst deadly. Usually the best that could be hoped for was a placebo effect from an ineffective treatment. Since mental illnesses often come with physical symptoms–and vice versa–it is sometimes hard to tell whether someone’s presenting symptoms are the result of a physical illness or a mental illness (recognizing, of course, that this is a line that is extremely blurry and ill-defined).

Having a certain unfortunate intimacy with chronic illnesses myself, I really identified with the pain and suffering the authors Ross writes about were experiencing. Chronic illness takes up a lot of space in one’s body and mind. Being able to transcend that to create incredible and timeless art is amazing. There is much speculation that suffering itself fuels creativity. Obviously there is an imperfect correlation: not all gifted writers have serious or chronic illnesses, and not everyone suffering from serious and chronic illness responds by generating Paradise Lost or Animal Farm. I can fully appreciate the benefits of modern medicine to mitigate the ravages of long-term illness. In so doing, though, have we silenced the muse that would have driven the next Melville or Hawthorne or Bronte to greatness? Perhaps future generations will lament the paucity of great literature from happier and healthier people, but I suspect that many (though not all) of the writers themselves would have exchange some of their fame for a bit more relief.

Ross keeps the book light despite its heavy subject matter, occasionally dropping one-liners unexpectedly in the middle of an otherwise difficult subject. I might wish for a follow-up book examining the lives of authors outside of the typically Anglo/American canon, but that is not a criticism so much as an observation. Shakespeare’s Tremor is an outstanding medical biography of 18 famous writers, writers whose personal anguish became the stuff of literary dreams.