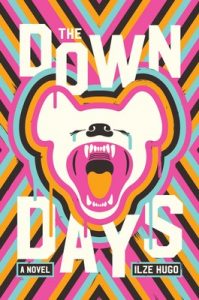 This is a book that simultaneously feels too real to be fiction and too fantastic to be believable. Ilze Hugo has taken a near-future South Africa coming to terms with a fatal plague and created a world that feels very present and very frightening.

“Joke.” “Laughter.” These words are no longer delightful or benign. A plague has swept the world, a plague where one of the symptoms is uncontrollable laughter. That is the beginning of the end for those who catch it. The disease is almost 100% fatal. As a result, large sections of the world are completely quarantined. Travel in or out is prohibited. In those sick zones, or at least the one in South Africa, all public laughter is illegal. Even children are not allowed to giggle outside of their homes. Laughing publicly can quickly lead to being captured and isolated under the assumption that you are sick, you are contagious, and you soon will die. Masks are required, and social distancing is encouraged.

In this environment, Hugo follows multiple characters as they make their way through their lives. A young girl’s brother has been taken by someone. A dead collector (someone who goes into homes to remove bodies of those killed by the plague) decides to help her find her brother. She enlists the help of a “sin-eater,” a man who literally offers to eat the sins of others so they can find absolution. She also involves a “pony jacker,” a man who walks on the edge of the law and sells human hair to mobsters who resell it at a profit outside of the quarantine zone. The pony jacker keeps encountering a mysterious woman with a luscious head of hair, but when he tries to get closer to her she always seems to escape into a crowd. Several other odd characters also make appearances: a security guard with a pet hyena, a guard for a strange convent of sisters, the leader of the convent, a young woman who can see spirits. Their lives weave in and out of each other’s spheres, often with one chapter beginning with a sighting of another character who was the focus of the previous chapter.

Western medicine focuses exclusively on the scientific method. Germ theory easily explains our current pandemic and guides us in avoiding it or surviving it. Other parts of the world take a larger view of health and disease. The Down Days posits that the plague it is describing, “Joke,” has a component that the scientific method cannot fully embrace. As the characters search for the missing toddler, they also are forced to look at the deeper truths behind the plague itself. Ultimately, the search for the child becomes the search for the contagion. Fantasy and science fiction meld together in a creative and challenging alternative view of medicine and life.

I doubt that Hugo is trying to write a manual for surviving or solving any current crisis. She is writing an engaging and intelligent story. What she does accomplish, though, is giving us a wonderful way to look at health and illness through a very different lens. The fact that the lens comes from fascinating and memorable characters makes it even more enjoyable.