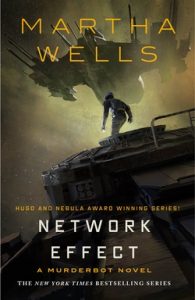 Scintilla has previously reviewed the four novellas in the Murderbot series, novellas which individually or collectively have won almost every science fiction award available. Now, in the first full-length novel, Martha Wells continues the story of our favorite depressed artificial intelligence. Network Effect keeps some existing characters, introduces some new characters, delves further in the universe Wells has been building, and gives us both our longest and deepest look into the heart of a being that actually has no heart.

Murderbot has been asked by its “client/owner/friend” (depending on who is asking about the relationship) to guard a research expedition. Her teenage daughter is going along as a student, and Mensah wants to make sure that she is safe. When raiders attack the vessel, Murderbot’s presence and quick action disrupts the attempt without anyone dying–as tempting as it was for it to just kill all the raiders.

Returning home it would be easy to think that nothing else could go wrong. Although Murderbot never fully shuts down, it does allow itself to begin watching some of its favorite unrealistic dramas. However improbable and imperfect they may be, watching videos gives the AI a general idea of how humans react and interact with each other and sometimes with AIs as well.

Immediately upon arriving in their home system, though, their transport is attacked. Murderbot and Amena (the teenage daughter) are captured and taken aboard the ship and then immediately into the wormhole. Once on board, Murderbot realizes two things: 1) This ship is the Perihelion, run by its sentient AI friend ART (I’ll let you read the book to find out what ART stands for), and 2) ART has been disabled and the ship is being run by a group of gray humanoid beings who seem intent on killing humans and controlling Murderbot.

What the gray humanoids do not know is that when you threaten its client, Murderbot reacts. Strongly. Violently. Often with deadly consequences. Furthermore, when you hurt its friend, those strong, violent, often deadly reactions increase in intensity.

Murderbot and Amena must find a way to stay alive, reboot ART, rescue the human crew of the Perihelion, defeat the gray men, return home, download and watch a bunch more videos…OK, that’s not on Amena’s list but it’s always on Murderbot’s agenda. In the meantime, Murderbot can evaluate its relationships with Amena and her mother, with ART, with the other humans, and that really sucks because the only thing worse than thinking about your feelings is talking about your feelings. SecUnits, the type of being that Murderbot started out, do not have feelings. They have commands, they have clients, they have bombs in their heads which go off if things go too badly awry. Not much room for feelings there.

Martha Wells’ writing is slick and smart. Murderbot is sometimes foul-mouthed, usually depressed, always grumpy, quite snarky, and very willing (even eager) to rip the intestines out from anyone who threatens its humans or ART. Wells is as good as anyone writing at creating a character that is “other.” Murderbot is not human, though it kind of wants to be. It wants to understand humans, interact with them, be accepted by them…just without all the mushy feeling stuff that humans do. No touching! It may not exactly know what a friend is, but it knows that it will give its own life in a nanosecond for any of its “clients.” Since it is able to choose voluntarily who its clients are, they might meet the definition of friends. If SecUnits felt friendship. Which they don’t. Probably.

Some authors are more comfortable with short stories than with books. Others thrive in the novella size more than full length novels. Martha Wells segues with ease and style between different story lengths. The four Murderbot novellas were award winning and absolutely delightful. Network Effect is every bit as good, but longer. I certainly hope that there are many more stories of any length to come.