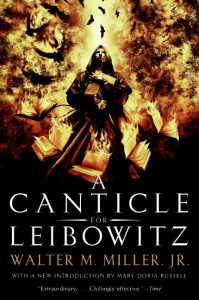 Originally published 61 years ago, A Canticle for Leibowitz is now regarded as a classic in science fiction. Walter M. Miller, Jr.’s dystopian vision of a post apocalyptic earth is actually a compilation of three shorter stories set in the same future, each roughly 600 years separated from the other. All of them take place in a small monastery somewhere in what is now part of the American Southwest, along what once was the road from Salt Lake City to El Paso. The Abbey of Leibowitz is dedicated to the honor of Isaac Edward Leibowitz, a Jewish engineer during the last nuclear war who later took vows in the Catholic church. Leibowitz, who is later canonized as “Saint Leibowitz,” founded an order dedicated to preserving writing and knowledge.

For centuries after the war, people blamed science and education for the devastation. “Simpletons” proudly burned books, executed the intelligentsia, destroyed schools and colleges and laboratories, and ushered in a dark age where reading was dangerous and learning was feared.

In the midst of this anti-intellectual fervor, the brothers who follow the teachings of Leibowitz hide books in their monasteries. They painstakingly copy books by hand so that the texts are preserved even as the pages rot. They become “bookleggers,” risking their lives to preserve human history in the anticipation that a day will come when education and learning are once again valued.

The first story follows one Brother Francis, a young and not terribly bright novitiate. While in the desert alone during a period of fasting, solitude, and silence, an old man visits him. This leads to Brother Francis discovering an underground bunker. In the bunker are various notes, relics, and diagrams dating back to the war several hundred years earlier, some of which seem to have actually been written by the Blessed Leibowitz himself! Many years later these become foundational to the decision in New Rome to canonize Leibowitz as a saint.

The second story, several hundred years later, shows a beginning of the end of the dark ages. In some ways this is literal: one of the brothers in the abbey has reinvented the electric light based on some of the drawings from the pre-war era. A secular scholar doubts that the documents are real. When he sees the lamp and reads the documents himself, he becomes convinced of their veracity and looks to share them with a wider audience.

The third story, again several hundred years later, follows what we may presume is the last abbot of the Leibowitz monastery. War is again looming. Mankind has again invented the atomic bomb. The mistakes of the past are being repeated. One difference, though, is that humans have colonized beyond the planet. Both the moon and Mars have significant populations. Alpha Centauri has a struggling but self-sustaining planet. The final mission of the last abbot is to send brothers into space, carrying with them the preserved learning of the ages and taking with them the hope that somehow, someday, humans can find a way to learn from their sins and survive their most dangerous enemy: their own nature.

Reading older science fiction is fascinating both for what it gets right and what it misses. Miller’s story predates the Internet. It has very Cold War sensibilities. I am not sure it would be written today the same way it was in 1959. But despite our technological advances and a (hopefully) less dangerous world with the end of the Cold War, it is very easy to see a nascent Luddite movement in the presence of anti-vaxxers and the divisions in my own country between those with and without degrees. In some ways, Miller’s dystopian future seems more likely today than it would have 40 years ago (I am not quite old enough to know definitively how possible it seemed when the book came out 60 years ago).

Canticle is also one of those rare science fiction books that treats Christianity with respect and realism. The brothers of the abbey are human. They are not perfect, they are not always kind or noble or pure or saintly. But they are aware of their failings, they are trying to be better, and they are committed to their mission of preserving knowledge. None can say whether Catholicism or any other religion would survive a nuclear world war (let alone whether humanity would). Of course, I am sure that Catholics and other devout believers would argue that their faith’s survival is a predestined conclusion! Regardless, Miller presents the faith of the brothers as a real faith, one that guides and shapes their lives, one that gives them meaning and purpose and direction and stability. I may not share that conviction, but I respect those who do and I appreciate the good that many people of faith do in this world.

Miller only wrote this one novel during his life (a sequel was published posthumously). Whatever his reasons were, he gave us a gift. Many years later, I am grateful to have received that gift.

One thought on “Book Review: A Canticle for Leibowitz, Walter M. Miller, Jr.”