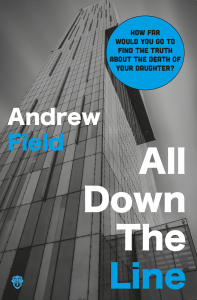 Mystery: All Down the Line, Andrew Field

Cain Bell is about to realize his fondest dreams. April Sands, the woman he loves, is celebrating a triumph, one that he has helped her to achieve. He proposes to her on the stage, in front of everyone, and she accepts. Joy is within his grasp, a joy he never expected could be his.

Then that same night, his world is upended. As they walk home through the streets of Manchester, April tells him that she has secrets, secrets that will make him hate her. Before they can discuss this any further, the couple is brutally assaulted. Only the intervention of a homeless man, a former boxer who has fallen on hard times, saves them. However, April later collapses and stops breathing. Although she is rushed to the hospital, the prognosis is grim.

Bell is no detective, but he is a former journalist, and when a story is there he knows how to dig. He does not want to write this story, but he needs to know. Why would this woman ever think he could hate her? Why were they attacked? Was it random, or was it targeted? How is Manchester’s most violent gangster involved? How is April’s ex-husband involved? The questions keep coming, and the secrets tie back to the most painful events in both of their lives. And quickly the real question becomes clear with no obvious answer to be found: can two people ever truly know one another?

Andrew Field’s novel has a mystery to be solved, or more accurately multiple interconnected mysteries. But it’s core is much deeper than the typical procedural drama. Cain Bell was a broken man, shattered by a singular event of trauma. April Sands pulled him back together. She helped him heal physically and emotionally. She gave him a renewed sense of purpose. She made him want to live again.

But was any of it what it seemed to be?

Few of us remain with our childhood sweethearts throughout our lives. We (Maria and David, the humans of Scintilla) met when we were teenagers, married when we were still in college, and are still together 34 years later. We realize that we are unusual in that regard. Most people meet and marry later than we did, or they have been married before, or they have some other history that precedes their existing relationship. How much of that history gets revealed to their current partner is going to depend on an infinite number of factors. Every relationship is going to be unique, every person is going to have her/his own perspectives on what and when and how much to tell, and what is right for one couple may be horribly wrong for another.

Sometimes the keeping of secrets is deadly to a relationship. The reverse can also be true, where the revelations of past behaviors can poison future possibilities. There is no way to know with absolute certainty which will be the case in any given dynamic. People are seldom completely predictable. Resilience and fragility are equally possible depending on the situation, and Field does a masterful job of exploring both as Cain unravels the secrets of his lover’s life. 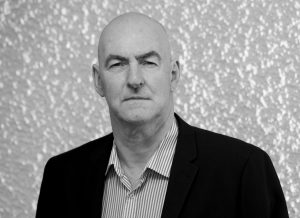 Our thanks to Emma Welton of Damp Pebbles Blog Tours for our copy of this book, given solely for our participation in this blog tour. For other perspectives on the novel check out the other bloggers participating in the tour. The opinions here are solely those of Scintilla.

One thought on “Blog Tour: All Down the Line, Andrew Field”