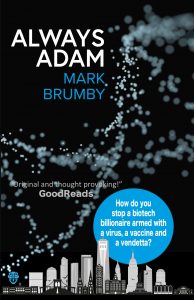 Sometimes a book arrives before it’s time. That seems to be the case with Always Adam, a crime-thriller/sci fi hybrid that was originally published in 2013. The good news with books that come too early as opposed to those that arrive too late is that you can republish them at a more appropriate time. With the arrival of a worldwide pandemic, that time seems to have arrived.

Spencer is a journalist looking for that next big story. When his phone rings, this might be it. “Simon” tells him that Adam Reid, a young self-made billionaire, might have murdered his parents eight years before. Simon offers no immediate proof of this, but sets Spencer off on a journey to seek the truth. This journey brings him into contact with a retired detective who worked the case and who wants to see justice done at last.

Traveling from London to New York City, Spencer finally gets to meet the mysterious Adam Reid in person. But is the seemingly affable and charming Adam truly what he appears to be? Or could a killer be hiding behind the smiling face of a billionaire?

Brumby brings together a story that is a little Jurassic Park and a little Pelican Brief. I want to avoid spoilers, but I will say that a woolly mammoth cloned by a genetics expert is part of the mystery. Scientists are still divided about both the possibility of successfully accomplishing such a feat and the ethics of bringing back a creature into a world where it would be all alone without any others of its kind. Still, it is the kind of fascinating thought experiment that sends dreamers like this reader into reveries.

Of course, any geneticist with the skill to clone a mammoth would (theoretically) also have the skill to gene-splice a virus into something new. Hence the timeliness of this re-release: a plague also factors into the plot. Again, trying to avoid spoilers, I’ll just say that the mystery surrounding Adam Reid, the mysterious “Simon,” Adam’s parents, Henrietta the mammoth, and the plague all come together in a venue my wife loved as a child in New York City: The American Museum of Natural History.

Brumby’s plot is driven almost entirely by dialog. Spencer makes his living from words, and words carry everything forward. Whether they are words Spencer is thinking to himself, dialog between himself and other characters, or monologues from those other characters, most of the action is told by the words of one character or another. This makes for an exciting and interactive read and Brumby does it very well.

Always Adam might have some scientific holes in it, but it is certainly more plausible than Crichton’s Jurassic Park and more timely than ever. Hopefully with this new release it will find a more ready audience. 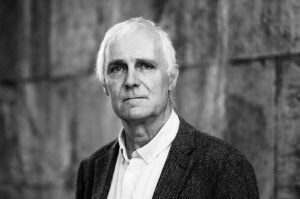 Our thanks to Emma Welton of Damp Pebbles Blog Tours for sending us this book in exchange for our review. For other perspectives make sure to check out the other bloggers on this tour. The opinions here are solely those of Scintilla.