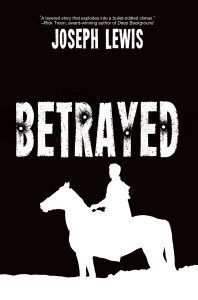 Betrayed is a mystery, an adventure, a thriller, and a coming-of-age book all in one. Part of a series of books by author Joseph Lewis, this series follows the adventures of a group of boys adopted into a family as they confront the adults who damaged their childhood, working together with adults determined to heal their future.

George Tokay is a Navajo boy in his mid-teens, adopted into the family and relocated to Wisconsin. His ties to his homeland remain strong, though, and when he gets a call from his onetime girlfriend Rebecca telling him that her brother, his best friend Charles, is missing, he is anxious to return and help look for him. Unwilling to allow him to go alone, his parents send two of his brothers, Brett and Brian, and two police friends of theirs to help with the search and watch over George.

Arriving in the Navajo homeland, the Dinè, the party splits up. Aided by an FBI agent, a Navajo deputy, and a young local teenager, they soon realize that there are multiple situations going on simultaneously. Not only has Charles disappeared, but local sheep are being mysteriously shot and left for dead. Other strangers are in the reservation, a group of paramilitary men who are watching and possibly threatening locals into silence. Whether all of these are related to each other or somehow happening independently of one another is something the group will need to determine if they are going to save Charles–and preserve their own lives as well.

Woven into the story is also the way that the boys are struggling with becoming the men they are growing up to be. George loves his brothers and his family in Wisconsin. But he was trained to be a spiritual leader among his own people. The Navajo hold the land, their land, sacred. They are not truly themselves when they are away from the desert and mountains that make up their home territory. Coming back raises these conflicts within him, not to mention the love that rekindles between himself and Rebecca. Brian and Brett struggle with their sexuality and their attractions to others and to each other. Brian in particular is torn between his affection for his girlfriend and his adoration for another of their adopted brothers. Brett feels a similar adoration toward Brian, but struggles knowing that his affection is not returned with the same fervor. Tensions rise among the three of them as each wrestles with his own doubts and insecurities and the push/pull that people of any age feel when their emotions are at war within themselves.

I am not sure whether the author or publisher intends to market this toward a YA audience, but it definitely has that feel to it. The young characters carried much of the story. The older policemen had their place, but the focus was on the three brothers and the young Navajo teenager who helps them. The author shows a strong compassion for and sensitivity toward the struggles that young men face growing up. Having been a young man once myself (in the increasingly far distant past), I appreciated both the candor and the tact that went into his descriptions of the angst and turmoil each boy held within.

Betrayed succeeds on many levels. The plot is interesting, if perhaps a bit predictable. The characters are deep and show growth through the course of the story. Most of all, though, it was refreshing to see the love that this pasted-together family has for each other. The parents were not perfect, the kids were not angels, but the love they all had for each other was sincere and heartfelt and powerful. Being a teenager has always been difficult. Being a teenager with a family that loves you makes a huge difference in that degree of difficulty. 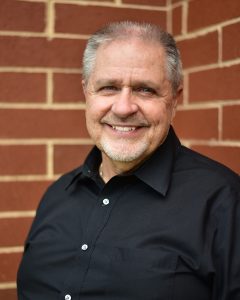 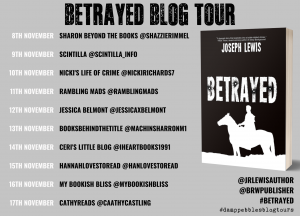 Our thanks to Emma Welton of Damp Pebbles for inviting us to participate in the Betrayed blog tour and for providing our copy of the book for review. For additional perspectives on the book check out the other bloggers participating in the tour. The opinions expressed here are solely those of Scintilla.