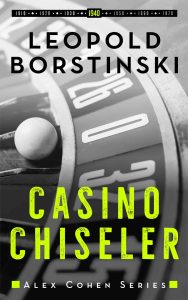 If you have followed our blog during this current year you may remember we had the opportunity to review the first three books in the Alex Cohen series in July. Now Leopold Borstinski has released the fourth in the series, Casino Chiseler, which takes Alex from his old haunts in New York City to new opportunities in the west.

Alex Cohen served five years in prison for tax evasion. Like his friend Al Capone, the prosecutors could not prove the crimes of murder and extortion and money laundering and drug/alcohol running. They could, however, establish that Cohen did not pay taxes on the money he “earned.” He spent five years keeping his head down and remaining “schtum,” finally getting released and able to resume his life.

However his old life in New York was closed to him. His former businesses were in the hands of new mobsters now, men who would not take kindly to his return. So Cohen decides to make a clean start, first in Los Angeles and then in Las Vegas. A clean start does not mean he has turned over a new leaf, though. Alex knows how to be one thing: a mobster. Starting out as a hitman for an LA gangster and doing occasional hits for old friends from New York, he soon becomes the enforcer and confidante and partner to one Benjamin “Bugsy” Siegel. Siegel has a dream to create a gambling mecca in the deserts of Nevada, and Alex is with him to achieve that goal by hook and mostly by crook.

All the things that appealed to me about the first three books are present in abundance in this book as well. The fictionalized presence of actual historical figures, including singers and movie stars and senators and mobsters and prosecutors and police. The use of actual events and locations: the building of the Flamingo in Vegas, the death of Siegel in LA at his girlfriend’s apartment, the Senate hearings on the mafia. All of these events are woven into the story, putting Alex into them as kind of an evil Forrest Gump suddenly appearing in the pictures.

Alex is a complex character. Hardly likable, Borstinski manages to make him as sympathetic as a hitman who controls prostitution rings and illegal bookmaking can possibly be. He loves his kids, he loves his girlfriend, he is loyal to his friends and partners…unless of course he has to kill them, but that’s just business. I mean, he does break down in tears after one hit. What’s not to love?

OK, so let’s be real. Cohen is a brutal monster loyal ultimately to no one but himself. But he is not a caricature or a cartoon villain. He is brilliantly written, deeply complex, and answers to a code of ethics that few would regard as “moral.” He is not a character easy to put down when the book is finished.

Our thanks to Emma Welton of Damp Pebbles Blog Tours for our copy of this book, provided for our participation on the blog tour. Check out the other bloggers participating. The views here are solely those of Scintilla.