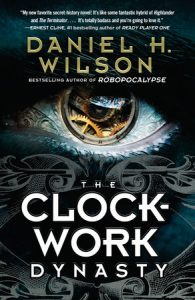 Pyotr awakens knowing he is different. He is in a strange room with an old man and a child-sized doll. The man is asking him a question, a question that at first he cannot understand, then it dawns on him. He is an avtomata, a construct, something made, a machine but alive. The man is asking what his purpose is, his motivation, his reason for existence. The only word he can find to answer is “Pravda,” “Truth/Justice.”

Pyotr is there when the doll is similarly awakened. Ella is his sister. He does not know how he knows this. He just does. And although his primary duty is to the tsar, he also feels a duty to care for and protect this much smaller avtomata When the tsar dies and their position in court becomes unwelcome, the two flee and begin a march through centuries into our present.

June is the granddaughter of a Russian who was saved from Nazis by an “angel,” a seemingly superhuman being who felt no pain despite being shot, whose breath did not steam in the cold, who never tired through the longest battles. Her grandfather had been given a gift by the “angel,” a disk with some writing in a long lost language, something she was told to keep safe and keep secret. Dedicating her life to learning more about this disk and the strange being who saved her grandfather, she follows stories of beings like her grandfather described until one day her search takes her to a doll that, when June discovers how to get her working, begins writing in an old European dialect to beware of the avtomata.

Daniel H. Wilson writes an adventure in The Clockwork Dynasty that takes us through history with Pyotr–who changes his name to Peter–and Ella who flee Russia for England. In London they become aware of other avtomata, some of them intent on killing Peter and Ella. The story switches from chapter to chapter, telling Peter and Ella’s story, then jumping forward in time to June’s story, each chapter advancing with information revealed from the other part of the story, until they merge in the present with a final confrontation.

Alternative histories are just fun. What if there were a race of superstrong and superintelligent machines, machines that were built to look like humans but which were decidedly not made from the same stuff as their flesh and blood counterparts. Part of the fun in the story are the questions that are not answered. I hope I am not giving away too many spoilers when I say that one unanswered question is, “Where did the avtomata come from?” No one knows. Where do humans come from? We can answer scientifically with evolution, we can answer spiritually with deities, we can answer philosophically, but the reality is that we just don’t really know why our species is self aware and distinct from the other creatures who share this planet with us. We are different. Avtomata are different. Yet in Wilson’s world they are both here.

Wilson is an expert in robotics and AI, which could lead to a dry and pedantic book. In this case, it doesn’t. Nor does it in his other books. Wilson is also an outstanding writer who knows how to let a story breathe. His characters and his plot drew me in and kept me reading. I may have to look a little more closely at that neighbor who seems tireless, who doesn’t age, who is unaffected by the weather, whose breath does not steam in the cold.

Then again, maybe it’s better if I don’t look too closely, after all.