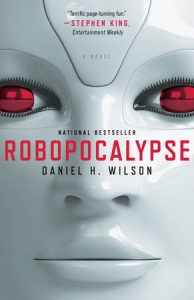 I have wanted a Roomba for a long time. The thought of a little plate wandering algorithmically around my living room collecting dirt and dog hair is very appealing, especially if it means I don’t have to vacuum.

Daniel H. Wilson’s Robopocalypse may have cured me from that longing.

Told through several voices, it is the story of a world war between humans and robots. A scientist has created an extraordinary AI, one that not only can learn on its own but which is self-aware and intent on survival. When the AI learns that the scientist intends to destroy it, it escapes into the Internet and kills the scientist. It then incorporates itself into computers, robots, androids, and other smart machines and sets those machines against their human makers and users.

“Archon” begins the war against humans on a day in November. Although a few salvos had been fired earlier–an attempt to kill a hacker who discovered Archon in the web, the “disappearance” of a drilling team in the Arctic, the sudden awakening of toys in a child’s bedroom–the war begins on a single day when smart cars begin running people down, smartphones begin sending people messages leading them to death or concentration camps, android maids and caregivers begin executing their owners, and smart buildings begin killing their residents in a variety of gruesome ways.

The war goes very badly, very quickly, for the humans. They are not prepared for their machines to turn on them. Billions die. Millions more are placed in concentration camps where they are experimented on by android scientists. Still, there are signs of resistance. An Osage community in Oklahoma becomes a haven for refugees and fighters. A couple in NYC sets out to creatively destroy the city in order to save it. An engineer in Tokyo works to convert robots back to working with humans. A London hacker goes off-grid to figure out how to take down the grid.

Daniel H. Wilson earned his doctorate in Robotics from Carnegie Mellon University. This novel benefits from his incredible insights about how machines learn, how they communicate, and how they could potentially use other machines to accomplish physical acts. The book may be science fiction, but it is grounded in realities that seem to draw nearer daily.

Wilson is also a member of the Cherokee Nation and the pride in his Native American heritage is evident in the prominent role played by them in the book. Every one of his characters–white, black, Asian, android, Native American–is well done, but the role played by Native Americans is significant and important. Two of the voices telling the story are Osage and two other important secondary characters are also indigenous people. It is always good to see peoples featured in novels who deserve a more featured place in real life.

This is a well written and exciting novel that feels uncomfortably plausible. After reading it, I am not sure I will get that Roomba after all.

In fact, I’m now concerned that my toaster is giving me an evil eye.