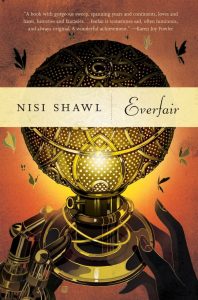 The real history of the region is cruel. King Leopold II of Belgium controlled large swaths of central Africa in the late 19th and early 20th centuries. He was a brutal ruler, milking the region for its rich natural resources and violently and viciously enslaving the population to work on rubber plantations and his other projects. Millions of native peoples were killed during his reign. Millions more were brutally maimed as incentives to keep the population under control or as punishments for real or imagined “crimes.”

Nisi Shawl speculates, What if someone had brought technology to bear on the side of the Africans? Their speculation creates the world of Everfair. Everfair is the dream of socialist utopians, the Fabian Society, in England and abroad. The Fabians purchase some large swaths of land in Africa. There they seek to create a truly equal society. Whites who are part of this dream emigrate to the country. Former slaves from America join them. Escapees from Leopold, including Chinese laborers on his railways, find a refuge there. And everyone sings and holds hands and dances into the night.

The people in Everfair have a technological advantage over Leopold’s men which aids them in their wars against the regime. The use of “aircanoes” tilts the playing field in their favor. Still, it is a violent war and lives are lost in the waging. But a more insidious problem threatens the country: their own people.

I deliberately omitted a key constituency from the list of people in Everfair: the natives who already lived there. Like countries around the world, the imaginary Everfair was carved by foreigners out of lands that were already populated. And just as in the world we know, decisions on borders, boundaries, constitutions, foreign policy, governance, and virtually every other aspect of life was imposed on the country by these foreigners.

Everfair, though, does posit a dramatic difference from the usual colonial narrative. What if the foreigners were well intentioned? The governance of this country does involve the white immigrants. It also involves black former slaves, resident indigenous peoples, and Chinese refugees. It even involves women! (Gasp!) Decisions are not made by masters from afar, but by a democratic process run by the actual residents. There are still multiple opportunities for offense and for racial misunderstandings. Overall, though, it is a process that gives everyone a voice.

This is far from a utopian vision of an alternate past, though. Everfair gets pulled in to multiple wars. Racial uneasiness continues. White settlers often cannot see past their own biases far enough to realize when they are being snobbish, foolish, and outright racist. Conflicts arise over religion, over native versus immigrant desires, over language and culture and governance. This country may offer an improved version of central African history to the attempted genocide that Leopold provided. But people are people. They may run from their pasts, they may change their locations. Their true characters will come along with them.

Everfair is a deep and nuanced book with fascinating and damaged characters. I could wish with Nisi Shawl for a world where things were better than they are. But I agree with Shawl that the challenges of being humans will never abandon us. Still, it is a hopeful thought that well intentioned people with a vision can make a difference, even if that difference is not as dramatic as we might hope for.