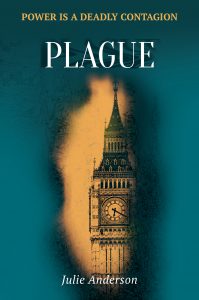 A police detective is called to examine a body found in the water. Although the state of the corpse obscures some of the details, it looks like the young man has been murdered by having his throat slit. The detective has seen crimes like this before: could this be the latest in a string of murders that he has been told could not possibly be connected to each other?

During a routine fact-finding tour for bureaucrats getting an explanation for the delay in a construction project, a chamber unexpectedly opens up. Inside the chamber lies a body, a young man, murdered by having his throat slit. One of the bureaucrats is a former investigator who acts quickly to secure the scene for the police. Her quick thinking gains the notice of some government officials who decide they want her on the case–primarily to alert them if any hint of scandal might touch on their government.

Plague gets its name from the site of some of the crime scenes. The body found in the unexpected chamber was at the site of a “plague pit,” a mass grave where victims of the bubonic plague during the Middle Ages were thrown when the number of victims and the poverty of those victims did not allow for individual graves. A subsequent body was also found at the site of an old plague pit. The press gets alerted to these locations and seizes on it: could the plague be stalking London along with a serial killer? Masked mobs threaten the police and the health services, believing that they are withholding information about the danger to citizens.

Like THAT could ever happen! (Sigh–it’s 2020. It’s been a long decade–and I’m writing this in September.)

There are other plagues, though, that weave this narrative together. Power, greed, sex, secrets, propaganda. Each of these plagues challenge the investigators. DI Andrew Rowlands has been on the trail of the killers for years. Every time he gets close, though, they stop for a while and the cases get cold. Cassie Fortune longs to return to a meaningful career, one that makes a difference in people’s lives. Their growing attraction for each other complicates their relationship and their investigation, especially when another party expresses an interest. As the case and the various plagues hurtle toward a shocking conclusion, the investigators have to question themselves and their own motivations at the same time they try to solve crimes committed and prevent future and greater crimes from occurring.

Julie Anderson has worked in the British government and did extensive research to make the workings of things like the Parliamentary security and the underground “lost” river Tyburne feel accurate. At times, like walking through the effluent that flows under the streets of London, the realism was quite…well, gross. Not that she should have toned it down! Anderson’s scenes are brilliant, her settings are vivid, her characters are fascinating, and her plot is intriguing. I am looking forward to the subsequent books in this nascent series. 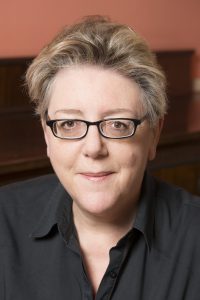 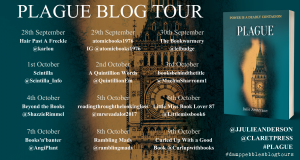 Our thanks to Emma Welton of Damp Pebbles for providing our copy of this book in exchange for our participation in this blog tour. For other perspectives on Plague, check out the other bloggers on this tour. The opinions here are solely those of Scintilla.