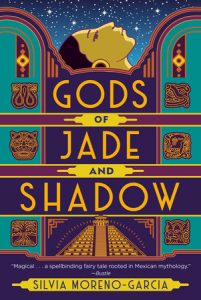 Casiopea Tun has not had an easy life. After her father died, she and her mother moved back into her grandfather’s home where they were treated as servants. Forced to clean and care for her ailing grandfather, beaten by him and bullied by her cousin Martin, she dreams of running away from her Yucatan home and going to the city.

Her opportunity arrives when she inadvertently frees a Mayan god who has been trapped for decades. Hun-Kamé is the deposed Lord of Xibalba. He plans to reclaim his throne from his brother and he needs her help to accomplish this.

Traveling with a god is bound to change a person. Casiopea embarks on an adventure full of danger. Enemies abound. They travel across Mexico and into the southern US, experiencing life during the Jazz Age. And Casiopea does change as she travels. The question is: does a god change when he travels with a human? Can he change? Should he change?

Sylvia Moreno-Garcia crafts a beautiful story from an unlikely mixture of sources. Rather than retelling or reimagining Mayan mythology, she takes that mythology and puts it into a more modern context. How would ancient gods handle cars and phones and flappers? How would a relatively conservative (by contemporary standards) maiden handle traveling with a handsome deity? Moreno-Garcia’s characters get put into difficult situations and react with emotions and responses that ring true every time.

Moreno-Garcia also wonderfully describes the different places her characters visit. Veracruz is different from Mexico City. Texas is different from Baja. Each location becomes almost a character in its own right, full of light and color and dust and sunshine. Mexico of the 1920s comes alive. The African influence in Veracruz. The American influence in Mexico City and Tijuana–expressed very differently in each city. The ancient traditions clinging to life in the Yucatan. The Mexican influences in El Paso. The economic benefits Prohibition brought to border towns. As the author herself notes, this is not an anthropology textbook. Nor is it a history textbook. But the obvious research and care she took in preparing and writing the book shine through every page. Mayan religion juxtaposed with 20th Century Mexican culture makes for a stunningly fine combination.

Her characters are also far from static. Casiopea grows in each chapter, facing new challenges with courage and increasing maturity. Hun-Kamé surprised me constantly. With my very Eurocentric upbringing in the US, I know almost nothing (to my embarrassment) about Mayan culture. Their gods had very different sensibilities than the ancient deities I grew up reading about. Hun-Kamé is an ancient, immortal, powerful being. However, traveling with a human and living in the human domain does affect him. Whether that effect makes for a lasting change…well, that would involve spoilers.

I have loved the works by Katherine Arden, Naomi Novick, and others who have taken myths and folktales from Europe and remade them fresh and new. Moreno-Garcia does this for the Mayans with Gods of Jade and Shadow, but also gives us an extraordinary look into a more recent Mexico. The combination is absolutely wonderful.