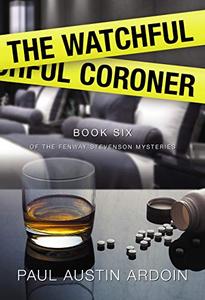 It would not be fair to say that everything is going smoothly for recently elected coroner Fenway Stevenson, but many things are better than they have been. Her father is lying in a hospital bed, comatose since being shot while saving Fenway’s life. As terrible as that is, it has shown her that her perceptions of him and of her stepmother were not completely accurate and she is finding common ground with her stepmother after years of animosity. Her boyfriend is finally divorced from his philandering ex, and they are free to date publicly. And the coroner’s office is humming along well despite working in some new employees.

Still, in a small town not known for its murders, yet another one occurs. A local owner of several car dealerships lies dead in a hotel room. Although the dealer was a known ladies’ man, Fenway was surprised to learn he was a newlywed. His bride: the ex of her boyfriend. The dealer was almost certainly NOT meeting his new wife at the hotel, and suspicion and evidence soon point to the unexpected widow. Fenway’s boyfriend is convinced that she didn’t do it, and it is up to Fenway to prove whether or not the former spouse of her current boyfriend murdered her current spouse.

Plenty of room for emotional and interpersonal land mines to explode.

I have noted in previous reviews of this series that Fenway Stevenson is a strong yet flawed heroine. She sometimes misjudges people, especially people she might be close to like her father. She can be headstrong and speak before she thinks. At one point she punches someone who, although he had it coming, is in a position to create problems for her. Still, when it comes to seeing justice done, no one is more determined than she.

I inhaled the last five books of this series in a single weekend. They are just that good. Paul Austin Ardoin is a gifted writer who has created a series with both effective plots that are resolved in the pages of a single novel and overarching schemes that take multiple novels to unravel. The Watchful Coroner may be his best yet in this series. We see real growth in Fenway as she learns to forgive her father and his wife, as she reaches out to new family she never knew she had, as she works on her relationship with Craig and her delegation to others at the office and her adjustments to the new staff members who are just not the same as their predecessors. Each of these creates tensions in her life that require adjustment and maturity, and Fenway rises to meet them.

Though she really should not have punched the guy. It will become a problem for her.

The Watchful Coroner shows the maturation of a special protagonist. It also shows the maturation of a gifted writer. This is as good a mystery series as you will find in print. You do not want to miss a single one of these books. They are gems, perhaps not fully seen by the public at large, but no less valuable for their obscurity. Do not expect that obscurity to last!

Our thanks to author Paul Austin Ardoin for our copy of The Watchful Coroner, provided solely in exchange for an honest review. The opinions are entirely those of Scintilla.