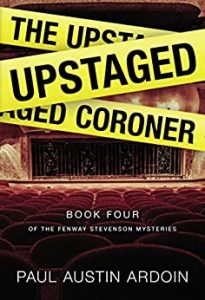 The local private university is internationally renowned for its Shakespeare program. Students have graduated to become famous actors. Current students travel yearly to England to participate in workshops and plays in the Globe Theatre: the Bard’s own playhouse. Even the school’s performances play to packed audiences who drive from all over to see the vivid interpretations that their brilliant director and professor brings to life.

So when a young woman is found dead on a staircase at the university, the priorities of the administration become clear. Nothing, not even a murder investigation, can be allowed to derail the coming production of Othello.

The university did not count on Fenway Stevenson.

Again, author Paul Austin Ardoin rewards the readers who have been with Fenway from the beginning. The university and its president were briefly introduced in the previous novel. Connections to characters from Book 2 and events from Book 1 come back into relevance. And plot elements and character developments that were hinted at in earlier books start to attain a new stature.

Again, the investigation follows twists and turns. The professor’s cancer-stricken wife cannot alibi him for the time of the murder. The murdered woman’s assistant lied about seeing her. The assistant’s boyfriend was sleeping with the murdered woman. And somehow the financial crimes that Fenway’s staff began investigating in earlier novels appear to have a connection to the university’s theater department.

It’s a good thing Fenway was a lit major before switching to nursing.

Ardoin clearly loves his Shakespeare and seems to relish the glare of spotlights and the feel of greasepaint. Having been in high school productions and watching one of my sons participate in them himself, I could easily relate to the victims and suspects and actors in the drama. Ardoin acknowledges his own participation in the theater in his afterward. There is an affection and understanding for those who participate hoping for fame as well as for those who participate hoping for something else: a better understanding of themselves, a connection to an ancient dramatic tradition, a place and a people where they can belong. Theater gives all that and more to certain people. Most actors (like most athletes) will never be professionals but the spotlights shine briefly on all of them.