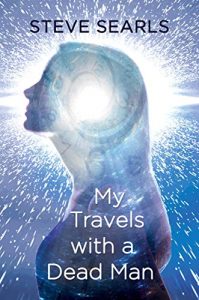 Fantasy: My Travels with a Dead Man, Steve Searls

Steve Searls has given us a debut novel that is among the most imaginative and creative books I have read in some time.

Jane Takako Wolfsheim was born and raised in the US, the daughter of an American father and a Japanese mother. At the age of 27 she meets a charismatic stranger by the name of Jorge Luis Borges. Unlike the famous novelist with the same name, “her” Borges is very much alive. Soon they begin a torrid love affair and Jane quits her job and leaves her parents’ home to move in with him.

That’s basically the last “normal” chapter in the book.

The rest of the book is put together something like a cubist painting. Jane does not know until much later that she is able to alter time and space. She, sometimes with Borges and sometimes without him, travels to Japan where she meets the famed 15th Century haiku master Basho and the Daibutsu of Kamakura. The Daibutsu is a statue of Buddha which appears in her dreams. Both of these Japanese figures offer her cryptic advice, most of it more confusing than helpful. Along with Borges’ lies and emotional abuse, Jane realizes that she cannot trust anyone in her life.

As the story evolves, Jane learns more about her powers, more about her lover, and more about her destiny. Without giving away too many spoilers, Jane’s destiny involves a mysterious “man in black” who haunts her dreams with malevolence and violence (including rape, which may be worth a trigger warning), danger to herself and her unborn child, and the potential to save or destroy humanity.

Jane is a complex character who grows a lot through the course of the book. She starts off with little of her own agency. She is almost literally swept off her feet by Borges, who seduces her upon their second meeting. She almost immediately drops everything, moves in with him, and before she knows it they are living in Costa Rica (and she has somehow lost several years of memory). By the end of the book she is in control of herself and her own choices–choices enhanced by her mastery of her powers. Through all the twists and turns of the plot, the focus remains on Jane and her development. This is an excellent choice made by the author.

This is not the easiest book to read and follow. That alone does not make it bad or good. It just means that not every reader will enjoy it. I did like it, but I do like challenges and quirkiness in my reading. I will take some issue with some of the marketing material for the book that suggested it might be a good book for young adults. With scenes of some sexual violence and possible abuse, and some physical violence, I would not suggest it to the typical teen reader. This is a challenging story to read for many reasons. Again, I liked it, but I would probably not give this book to just anyone.

Steve Searls retired from practicing law in 2002 due to an autoimmune disease. Raised in Colorado, he now lives in western NY. My Travels with a Dead Man is his debut novel.

For readers who embrace a challenge, who enjoy a twisted plot in the fantasy genre, and who appreciate seeing a female protagonist grow into her destiny, this is a gem from a new writer. Searls admits this book has fulfilled a dream for him. I hope that he does not stop dreaming any time soon. 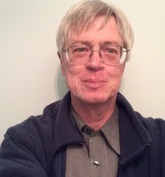 Our thanks to Rachel Gilbey of Rachel’s Random Resources Blog Tours and to author Steve Searls for our copy of this book (and we are so excited it was an actual print copy! Thank you!!!), provided in exchange for our participation in the blog tour. The opinions here are solely those of Scintilla. For other views of this book, please check out the other bloggers on this tour.