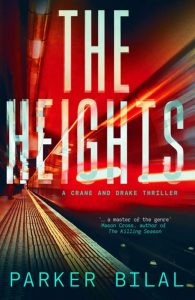 One thing I miss in these COVID days is browsing through the local library. Our local library, Schlow Centre Region Library, is extraordinary for a small city library. I have discovered many books there put onto display shelves by librarians eager to share the book love with patrons.

One such discovery was the Makana Mysteries by Parker Bilal. I have reviewed a couple of them on this site and hope to return to the series someday. Following the exploits of a Sudanese private investigator based in Cairo, Egypt, I fell in love with the vivid descriptions of Cairo and the mix of characters that filled his books.

Now this same author, a pen name for Jamal Majoub, has turned his attention to the city of his birth. Ray Crane and Cal Drake became partners in a private investigations firm in the first book of the series, The Divinities. In this second book, The Heights, their trust in each other is challenged when each is confronted by ghosts from their past.

A childhood acquaintance of Ray’s wants to hire the team to find his girlfriend. She has been missing for several days and he is worried that something has happened to her. Cal takes an immediate dislike to this man and does not want to take the case. However, the man offers something that the new company desperately needs: money. They take the case and begin to investigate.

Cal’s ghost is somewhat more ghostlike. A package opens on the London Underground. A woman’s head spills out. The woman is someone Cal knows, an informant who went missing four years before when he was part of Scotland Yard. Her body, minus her head, had been found soon after her disappearance, so why is her head appearing now in an IKEA bag on the tube? Although there was no evidence against him, suspicion fell on Cal four years before and he was demoted and sent to a much smaller, out of the way post. Eventually he left the force and teamed up with Ray. He still wanted justice for this woman, though, and intends to find her killer(s) wherever the trail may lead.

As in the Makana series, Bilal flavors the novel with people from a variety of backgrounds. Ray is an English/Iranian woman whose father was a wealthy civil servant…and whose mother died in an Iranian jail. She has never really forgiven her father for abandoning her mother in Iran, but he is old and in financial trouble and he needs her help. Cal is a black man who grew up in London, but who struggled against prejudice and stereotypes in his climb through the Metropolitan Police Department. Part of him wonders whether that bigotry played a role in his punishment after the death of his informant.

And as in the Makana books, the city is a major part of the story. I have visited London just as many times as I have visited Cairo — which is to say, never. Bilal explores the city through his characters, visiting neighborhoods from the seedy to the posh, discovering gentrifying communities and old warehouse districts. London is a very cosmopolitan city, and characters in the book come from America, Brazil, Dubai, Greece, and Serbia (I’ve probably missed some places). Bilal spent many years living in London. His clear-eyed view of the city is an added benefit to this novel. (He now lives in Amsterdam, and I am not-so-secretly hoping that a new series gets put into this city.)

Parker Bilal is a wonderful writer who creates amazingly complex plots with interesting and equally complex characters. His initial plan for the Crane and Drake series is for a trilogy. If he chooses to go further with them, though, it would please this reader greatly. I have yet to find a Bilal novel that disappoints. The Heights is everything a mystery reader could want and more. 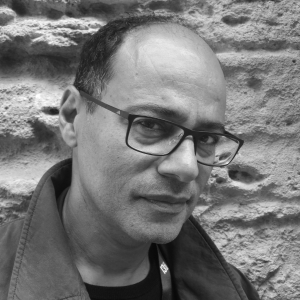 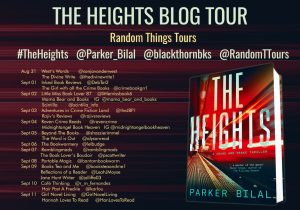 Our thanks to Anne Cater of Random Things for our copy of The Heights, given in exchange for our participation in this blog tour. The opinions here are solely those of Scintilla. For more views of The Heights (see what I did there?), check out the other bloggers involved in this tour.

One thought on “Blog Tour: The Heights, Parker Bilal”