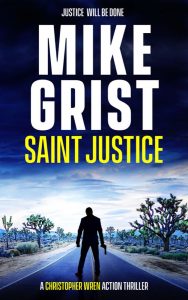 Thrillers tend to come with certain built-in tropes. Chief among them: a white man (or sometimes woman) faces intractable enemies and comes out on top. I am sure there are thrillers not written in English that employ a more diverse set of protagonists. English language thrillers, though, tend to be monochromatic.

Christopher Wren is not white. His heritage is not specifically mentioned but he is able to pass as Latinx or Middle Eastern. Several times within the book his “dark skin” is noted. This all by itself makes Saint Justice different from your typical thriller fair.

Wren is on the run from the sins of his own past and from the CIA, the organization he served for many years. While in Utah he stumbles into a biker bar that caters to white nationalists. His goal: get beaten up badly enough to quiet the storm within his heart.

He gets his wish but the bikers also steal his car. Furthermore, although he does not mind bikers per se, he despises white supremacists. He tracks them down to a warehouse where he discovers that they are involved in much more serious crimes than he first thought. These bikers are part of a human trafficking ring.

The story takes us from Utah to Chicago to Minnesota as Wren seeks the ultimate power behind the human trafficking ring and flees from the pursuing CIA. It is a story of forgotten people, undesirables, people very few notice are missing and even fewer who actually care. It also takes us into parts of Wren’s backstory, giving us brief glimpses into a childhood that scarred him, a marriage that fulfilled him, and a broken promise that devastated him.

Wren has also cultivated a following of similarly damaged people whom he helps reshape their lives. In turn, when he needs them, they respond. He calls it his “cult,” a term that has some deep echoes within his own psyche. Throughout the book these people are there for him. By the end of the novel they become game changers.

Saint Justice is the first of a series of books featuring Christopher Wren. So far four have been published. It is an ongoing series that looks quite intriguing. If nothing else, having a nearly superhuman operative who is not white makes it a refreshing change of pace. Having that operative also leading a cult following definitely creates wildcards that can be played in future novels. I hope to keep following this series and find out more about this very different character. 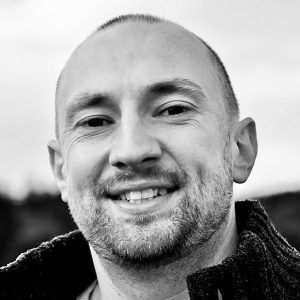 We want to thank Emma Welton of Damp Pebbles Blog Tours and author Mike Grist for our copy of this book, provided solely in exchange for an honest review. For other opinions on the book, check out the other bloggers on this blog tour.