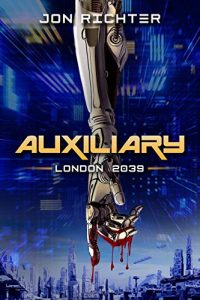 In the not too distant future London imagined by author Jon Richter, robots and AIs meet almost every human need. Very few jobs remain. Children are taught by virtual master teachers with only a classroom monitor to make sure they do not leave the room. Most medical procedures are performed by robots. Humans are no longer permitted to drive. About the only two jobs that still require humans are crime and policing.

Detective Carl Dremmler usually finds bodies of people who were so involved in a virtual world that they simply stopped eating and wasted away. Actual murders are quite rare. So when he is called to the grisly scene in one apartment it is all he can do to keep his supper down. A young woman has been brutally beaten to death, smashed against the wall by her boyfriend.

Police literally caught the man red-handed. The man called them there himself. When they arrived, he was still holding his girlfriend with one hand–a cybernetic replacement arm with enhanced strength. Police had to remove the arm before the man would let her go.

What could be more cut and dried for a detective? Everything about the murder was obvious. Except the boyfriend claims he didn’t do it. His arm acted on its own. He could not stop it and could not control it. Despite his horror and his attempts to stop, he had to watch his own arm kill his soulmate.

Dremmler knows this is ridiculous. TIM, the AI that runs almost everything in London, cannot be hacked, cannot be compromised, cannot commit murder. The boyfriend must be lying.

He has to be lying. Or everyone is in more danger than they could ever have imagined.

Richter’s plot and world have echoes of other “tech gone wild” sci-fi works. As I read it I thought of various books, movies, and tv shows with similar warnings: I Robot (the movie more than the book), Westworld, John Scalzi’s Lock In series. But that is somewhat unfair to Richter. This world is definitely his own, and despite the surface similarity to those other works Richter has made London of 2039 unique. And despite the ubiquity of technology, the plot is quite human. Dremmler is coping with great loss in his life by relying on alcohol and a “companion” robot (yes, she’s exactly what you’re thinking: a maid with benefits). As the book goes on, Dremmler is forced to confront that pain head-on and find some sort of resolution for it.

Richter also does a good job of not answering every question. Can robots/AIs feel? Maybe. Maybe not. Can robots/AIs go crazy? Can humans coexist with ultra-advanced technology? At what point does replacing body parts shift one over the line from being an enhanced human to being a feeling android? And Richter keeps the questions and the surprises going literally to the last sentence of the book.

Auxiliary: London 2039 is either utopian or dystopian. Or maybe it’s Dickensian: the best of times, the worst of times. Either way, it is an extraordinary novel, one that I will be thinking of for quite some time.

Our deepest thanks to the publisher TCK Publishing for our copy of the book, given in exchange for our review. And our apologies to the author and publisher for letting the time escape and not getting the review done back in June when we said we would do it (totally Dave’s fault, and he is checking on the brakes while under the bus). The opinions are solely those of Scintilla.

Jon Richter lives in London where he spends some of his sun-cycles trapped in the body of an accountant called Dave. When he isn’t forced to count beans, he’s nerding out over books, movies, and video games—or any other great storytelling medium.