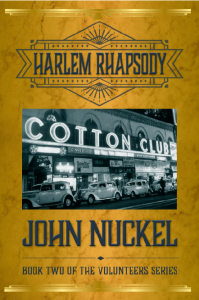 Harlem Rhapsody really caught me with two questions considered during the course of the novel. What is the difference between a gangster and a tycoon if they are using similar methods to accomplish their business? Are evil actions done in the pursuit of noble ends any different than evil actions done with wicked intent?

Joe McNally was an Irish Republican fighting the British for Ireland’s independence in the early 1900s. After the death of Michael Collins (an actual historical figure killed in 1922), he was arrested and detained aboard a prison ship. For almost two years he was beaten, starved, and kept in isolation and darkness. One day, his captors take him up to the deck. He assumes he is to be killed, but instead he is transferred to another ship and taken to a hotel in New York. There he learns that his benefactor is none other than Jack Morgan, son of the banker J.P. Morgan and himself one of the richest men in the world. Joe can keep his freedom if he chooses to work at some mysterious tasks for Morgan. It’s not a hard decision.

Charles Merritt is a veteran of The Great War. Devastated and shell-shocked as so many veterans were, he turned to alcohol for relief after coming home. Finally able to free himself from his demons, he is now a student at Columbia and plays jazz saxophone with a small ensemble at night. Then he is called into a meeting with Jack Morgan and John D. Rockefeller. They make him a similar offer to the one made to McNally: come and work with us. In exchange they will finance his education and invest in his home community: Harlem. Nervously and reluctantly, Charles accepts.

After introducing the characters, author John Nuckel takes us on a tour of Harlem during the Jazz Age. Gangsters and showgirls, Tammany Hall and tycoons. The Harlem Renaissance. Guests from history make frequent appearances in the book: Duke Ellington, Louis Armstrong, Mae West, Arthur Rothstein, “Lucky” Luciano, Meyer Lansky, J. Edgar Hoover. The famous Cotton Club is the setting for much of the book, and a fictionalized version of the club’s owner at the time, Owney Madden, is a main character of the book. In life and in the book, Owney Madden was a gangster and bootlegger who bought the club from boxer Jack Johnson and ran it as a speakeasy during Prohibition.

Along the way, Nuckel weaves in the actual history of the time. The fictional Merritt served with the Harlem Hellfighters in the war, an actual division of African American men. At times he shares his memories of the trench warfare that killed so many soldiers. The murder of Arthur Rothstein is reimagined for the purposes of the story, but the murder did take place followed by a trial that ended when charges were dismissed. The Cotton Club did feature many of the great African American musicians who were changing the sound and the face of music. Tammany Hall did run New York City in collusion with gangsters like Rothstein.

And the “robber barons” of the late 19th and early 20th centuries did use tactics and methods that were quite similar to those used by the criminal underworld. Private armies were employed to beat up and even kill dissenters, especially union organizers. Politicians were owned by tycoons as well as gangsters–sometimes by both at the same time. In the book, one of the pivotal events is planned and executed by a gangster but is done with the full knowledge and secret involvement of Jack Morgan and other uber rich men. Hence the questions above: gangsters vs. tycoons? Evil done for evil ends vs. evil done to achieve good ends?

Harlem Rhapsody captures the spirit of the era. Liquor flowed, gangsters and tycoons ruled, and black culture soared. John Nuckel may not have been alive during that time, but he brings it to life in the pages of this novel. 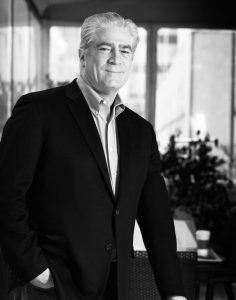 Our thanks to Stephanie Caruso of Paste Creative for our copy of this book in exchange for our review. (She must be quite good at her job of book promotion, since we decided to purchase another book by the author on our own!) The opinions are solely those of Scintilla. Check out the rest of the blog tour for more reviews of this book.

John Nuckel grew up in the welfare apartments of a middle-class town. “I’ll meet you there,” he’d always say to his friends. Couldn’t have them seeing the two-bedroom apartment in which he lived with four siblings and his mom.

They didn’t have much food, the furniture was charity, the TV a small black-and-white. He went to bed hungry many nights. What they did have was a mother with a creative spirit. They had music—her record collection was bigger than all of theirs combined. And they had books. A new book every two weeks. John devoured them.

The ingredients to develop “John the author” were tossed in the pot at an early age. The old-school music—Sinatra, Benny Goodman, Artie Shaw. Reading “grown-up” books before he was ten—Dickens, Swift, Hemingway, Chandler, and too many more to list. He’d finish a novel then go hop the fence to the schoolyard to see what his buddies were up to, back behind the handball courts.

The Rector series was John’s first trilogy and included The Vig, Grit and Blind Trust. John is currently working on his latest series, The Volunteers, which started with Drive and continues with his latest novel, Harlem Rhapsody.