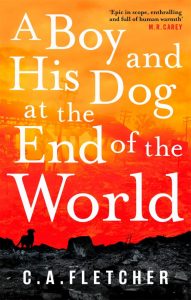 Dystopian Adventure: A Boy and His Dog at the End of the World, C.A. Fletcher

My name’s Griz. I’ve never been to school, I’ve never had friends, and in my whole life I’ve not met enough people to play a game of football. My parents told me how crowded the world used to be, before all the people went away. But we were never lonely on our remote island. We had each other, and our dogs.

Then the thief came.

So begins a novel that pulls you in from the very onset and refuses to let go of you until the amazing final sentence. A Boy and His Dog at the End of the World is amazing. Full of beautiful prose, vivid settings, exquisite characters, and a brilliant plot, it is everything you want from a book. Yes, it’s a dystopian future after a slow-acting pandemic. But it’s unlike anything else I have read.

Griz and his family live on an island off the coast of Scotland. They are among the very few humans remaining in the world: perhaps 7000 or so are left. A disease called “the Gelding” has swept the world, essentially rendering almost everyone sterile. Within a generation most people are gone.

Griz’s parents are among those very few who could still have children, but as society collapsed around them they decided to retreat to an island away from other people and raise their children. Griz is the youngest of their four children. One of the other children had been killed in a terrible accident some years before and their mother was severely injured at the same time. She lived, however she was never able to speak or even feed herself again.

When a trader shows up on their island, it is quite an occasion. Brand plies the family with stories of the outside world and of his trading adventures. He seems like an extraordinarily friendly fellow until morning arrives and Griz finds that Brand is sailing off with one of his two dogs.

Thus begins the adventure. Griz and his other dog give chase. Pursuing Brand first to other islands and then to the British mainland, they find a world left empty and being reclaimed by nature. Cities inhabited only by memories. Amusement parks with strange skeletons of the rides that they once sported. Railroads identifiable only by the straight lines of trees growing between the tracks.

C.A. Fletcher’s writing is as good as it gets. From the descriptions of the empty cities to the discovery of trees by a boy who has never seen them before to the shocking twists at the end of the story the prose is fresh and gripping. The setting is a world emptied of humans. But the story is really more of a love story between a boy and his dogs. How far would you go to protect those you love? In Griz’s case, perhaps beyond the end of the world.

This is not a book you want to start reading in the evening. Trust me on this! Once Griz gets hold of you, he will not let go until you get to the extraordinary last page. The final sentence of the story is one that will stay with me for some time. It truly is one of the best endings to any book I have ever read. You especially don’t want to begin reading it on a work or school night. Not only is it difficult to put down, but the novel infuses you with its grace and beauty making sleep quite elusive.

This may be set in a dystopian future, but it is truly a book of hope and resilience and most of all, love. A Boy and His Dog at the End of the World is mesmerizing and gorgeous and absolutely worth losing a night of sleep for.