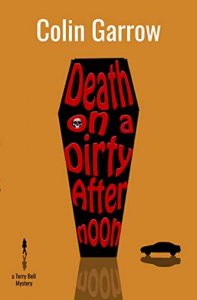 One thing the ongoing pandemic has hopefully taught us is to see invisible people. While many of us stayed at home, grocery store employees and sanitation workers and delivery drivers and other typically low-paid workers kept our food supplied and our garbage collected and our online purchases delivered.

Terry Bell is an invisible worker. A taxi driver. Someone most people don’t notice. Unfortunately for him, someone has noticed him.

First, his friend dies from a heart attack. This in itself is not suspicious, but the man’s body is laid out on his dining room table.

Then, someone breaks into his apartment. There is not much worth stealing, but more problematic is what they left: the body of Terry’s boss from the cab company.

Now, the police have two strange deaths with Terry’s involvement. There is no evidence connecting him to either death (apart from the man being killed in his apartment with his hockey stick), but clearly they suspect something. So Terry decides it is up to him to solve the crime, before he becomes the chief suspect.

This first-person novel is narrated by the interesting protagonist, Terry Bell. Terry is a plain spoken cabbie. He is not a professional investigator, not trained in any martial arts, not gifted in surveillance or counter-surveillance, not a sharpshooter. He drives a cab part-time, likes to drink, has trouble keeping a girlfriend, and is very, very nosy. Other than the drinking, he is unlike most other investigators in mystery novels. But his quick wits and dogged pursuit of the truth lead him to find answers. They also lead him to find enemies.

The plot itself is quite clever. There are more than a few red-herrings. And although Terry is the narrator, he does not reveal all of his own information to the reader until much later in the book. The author does a wonderful job of letting the mystery unfold gradually, introducing characters that will matter more later, and providing clues that take Terry and us to the next step.

This was a very entertaining read introducing a very different type of investigator. Terry Bell may not be the next Sherlock Holmes. He might, though, be worthy to give the great detective a lift.

My thanks to Emma Welton of Damp Pebbles Blog Tours and to the author Colin Garrow for my copy of this book. Although it is not part of a blog tour, they were kind enough to provide it to give context for a later book which is going on tour. The opinions are exclusively those of Scintilla.Info.

One thought on “Book Review: Death on a Dirty Afternoon, Colin Garrow”