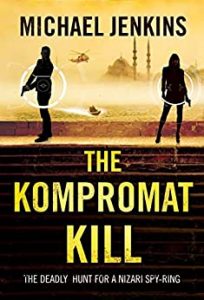 Emotionally damaged former agent Sean Richardson is finally starting to heal. Living in the south of France with his girlfriend, he is focusing on his art, his lover, and rebuilding his life away from the British secret service. There is always the possibility he could be called back, but for now things are calm.

Things change when a British diplomat disappears from the heart of London. An outspoken Jewish couple is brutally slaughtered in their own home. A rogue bomb maker goes off grid. These may be unconnected events, but indications are that there is some kind of connection, and Sean gets the call.

Of course, the last thing he needs is to be summoned for a mission involving his ex-girlfriend who was responsible for him getting kicked out of the service to begin with. Not to mention receiving shocking news involving his late mother.

Sean wants to trust his handler, but spy handlers are always playing their own games within games. Sean cannot trust his ex-girlfriend, but she has information he cannot ignore. And he wants to trust himself, but given the damage to his psyche he may be his own worst enemy.

Kompromat Kill is the second Michael Jenkins novel featuring Sean Richardson. Unlike the first novel which was mostly constrained to a small area, this one sweeps the characters from France to London to the Mediterranean to Kuwait and Iran and back to England. Full of action and adventure, secrets and mysteries, Kompromat Kill is a spy novel that should appeal to most fans.

Sean Richardson remains a challenging figure. In turns likable and appalling, we learn more about what changed him from a committed family man and dedicated agent to a broken, binge-drinking wildcard. Held together (barely) by his friends, he remains both an indispensable asset and a dangerously unpredictable weapon that could go off at the wrong time or in the wrong direction.

Like him or not (and I am in both categories), Sean Richardson makes for a fascinating character study in the midst of a thrilling spy novel. This is an interesting series.

Our thanks to Emma Welton of Damp Pebbles Blog Tours and author Michael Jenkins for our copy of this book in exchange for a review. Again, our deepest apologies that we did not post this as scheduled on May 13, 2020.